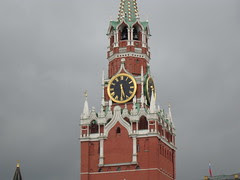 Kremlin Chimes from Saviour (Spasskaya ) Tower (Frolovskaya).
Originally uploaded by Jonathan Marks
I have listened to these bells for years in the days of Radio Moscow World Service. But I didn't realise until now that the chimes have always been built by Dutchmen.

On April, 16, 1658, according to the decree of Tsar Alexey Mikhailovich, the tower was renamed Spasskaya after the Vernicle Icon placed over the gate facing Red Square. The icon itself has not survived. Russian architect Bazhen Ogurtsov (Cucumber) and English clockmaster Christopher Galloway supervised the construction of the marquee.

The first clock on the Spasskaya Tower was installed by Galloway's team. In 1707, a Dutch musical carillion chime was sent to Moscow on the order of Tsar Peter the Great. That lasted a century. Ivan Butenop and his brother Nicholas, Moscow mer­chants of Dutch origin, founded in Moscow in 1830 a mech­anical workshop manufacturing farm machinery, fire-fight­ing hoses and tower clocks. From 1851 to 1852 the Butenop Brothers fully reconstructed the Kremlin chimes inside the Tower of the Savior in Moscow. For the following 15 years the Butenop Brothers mechanical es­tablishment took care of the proper operation of the mechan­ism of the chimes and the firm's craftsman wound them.
Posted by Jonathan Marks at Sunday, July 12, 2009