Future of Passport Book in Limbo 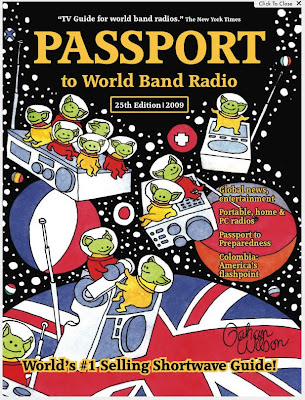 You knew that VHS tape was dead when Disney started giving away a free player with a set of videos. Confirmation that shortwave wireless is finished in the Western World comes when one of the two remaining shortwave annuals announces the 26th edition is uncertain.

Despite this, for now we are continuing to maintain the WorldScan® database and uphold all proprietary material. Among other things, this should help allow for an orderly return to production, under IBS' aegis or otherwise, should conditions allow.

Can't see an orderly return to production coming anytime soon, when this kind of production has shifted platforms ages ago, despite denials to the contrary. There may be some fans of the medium left in the Western World. The problem is that that doesn't include advertisers.
Posted by Jonathan Marks at Friday, July 17, 2009

Email ThisBlogThis!Share to TwitterShare to FacebookShare to Pinterest
Labels: "Passport to world and radio" "passband"

'Passport' has been a paper based US-centric annual publication in the niche SW world of the niche radio medium.

Hardly surprising to see it go into limbo.

WRTH on the other hand includes AM, FM, SW and TV [all to a greater or lesser extent], feels more 'worldly' in scope, and has a growing [though small] web presence with some online updates.

Sort of a combination of niches in the niche radio world, and a few more legs to stand on.

So it's not just a 'shortwave' guide, though I'm sure copies no longer sit on the desk of every station listed, SW included.

Has a paper based 'radio' guide [supported by digital media] of some kind still got a future?

I think so, but don't press me for details because I don't think the right business model has yet emerged.

My belief however is that a paper version will be driven from a digital content core and meet a different market demand than hobbyist SW listeners.

It may even be available free, using a self-publishing model such as Lulu with customized versions for each user and depending on how many adverts the user is willing to download.