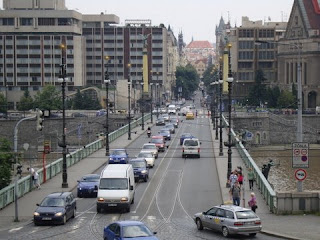 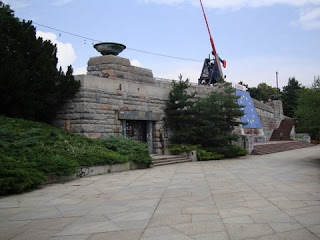 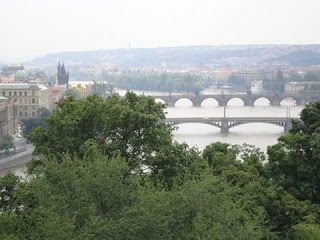 There used to be a statue of Stalin in the communist period. Joe beamed across the river from a hillside park on the North shore across the bridge and into the historic centre of Prague. The statue was removed and replaced with a sort of metronome. I climbed the 254 stairs to the top to find a skateboard park and what appears to be a sort of shrine to the late Michael Jackson. An English language broadcast by Radio Prague in May 2005 gives the background to the Stalin Statue and its rather macabre connection with death.

Tourists come here today, not only for the breathtaking view but to see the large ticking metronome, which was erected here in 1991. But for the local residents this spot holds a darker memory - little do the tourists around here know that exactly fifty years ago, at this very site, some six hundred men and women were working around the clock to create the world's biggest monument ever to honour the Soviet Communist party chief Josef Stalin.

The 50-metre high massive statue of the finest marble was proudly unveiled by Czechoslovakia's Communist regime on May 1, 1955. For seven years the residents of Prague had the Soviet leader follow their every move from the hill above. The 17,000 tonne statue - Stalin's jacket button alone, decorated with a hammer and sickle, of course, was half a metre wide - featured the Soviet leader in front of a line of workers - jokingly called the "Fronta na maso" or "meat queue" by Prague residents, as this was a time when they were a daily part of life in the city.

There are some dark legends associated with the statue. Its creator, Otakar Svec committed suicide a day before the unveiling. The man who posed for him as Stalin - an electrician from the Barrandov film studios, failed to shake off his nickname "Stalin", took to drink, and died three years later. And, the vast statue's glory days were short-lived. Stalin's reign was denounced by the new Soviet leader, Nikita Khrushchev, and the statue was destroyed just seven years later, on Moscow's orders in 1962.

Too heavy to be displaced, it was blown to pieces with 800 kg of explosives and 1,650 detonators. Some witnesses claim the party chief was decapitated immediately after the first explosion, his head rolling into the river waters below. Before the remnants of the monument were stored, they were loaded on a truck and paraded in front of cheering crowds that gathered to celebrate the event in the streets of Prague's Old Town. Was it just a coincidence or a bad omen that less than a year later, the driver of the truck died in an accident? 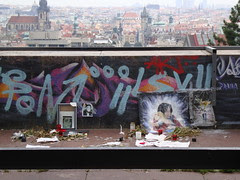