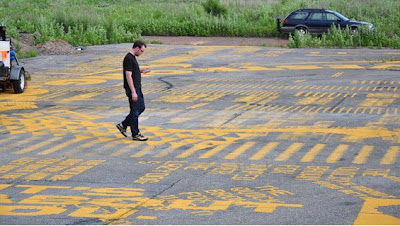 Actually more interesting than the Tour de France itself. Something I said it chalked up somewhere in yellow. And will be washed away by the rain. Its the brainchild of a Pittsburg company called Deeplocal and the robot company Standardrobot. I like Standard Robot's one logo, one link website which broadcasts the message - don't bother us, we're building robots not websites.

Deeplocal spun out of a Carnegie Mellon University art and technology research lab, following more than three years of research into local and collaborative information collection, storage, and visualization. They seem to have been doing some interesting projects for the BBC too. “Beat The Boss,” a well-loved British television show, pits a team of three kids, “The Bright Sparks” against a team of three successful bosses, “The Big Shots,” and asks them to create a new product that would be marketed to kids. The winner is the group that creates the product that fares the best at youth judging. Pittsburgh’s favorite condiment company H. J. Heinz Company got into the act as the client for an episode in April 2009, and challenged the two teams to create a new sauce for Heinz. The video below is fascinating. Don't be put off by the unfortunate freeze frame below.