My first generation Iliad reader has just failed completely. The screen seems to have packed up along with the battery which was going anyway. Am I going to replace it with a 2nd generation Iliad for a mere 599 Euros? Er, no. Never.

I bought one and tested it for a client, following how it was implemented by one of Holland's leading dailies, the NRC. But the device had very poor navigation and battery life and didn't do what it said on the box. If the battery failed you didn't get the last page held in memory - it just faded to a green screen. That combined with the ludicrous formating of the NRC (each article was a new page) and you couldn't cancel the paper edition. The start-up running it was slow to respond to complaints in the chat rooms, which means they didn't really care about their early adopters. Were they offered discounts when the new version came out? No. Loyalty meant nothing.

I cannot see a future for these guys in Eindhoven when there are devices like the Kindle and now Cool-er on the market. iliad is 2.6 times the price of the Cool-er and that means for me Iliad has entered a new phase. History.

At the same time we're seeing some strange going's on with Amazon's Kindle. They have deleted copies of books some have already bought. Ouch....very bad week for the e-book 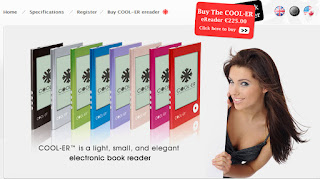