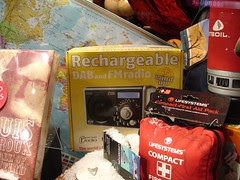 Wind up Digital Radio
Originally uploaded by Jonathan Marks
TERRESTRIAL RADIO LISTENING IN USA IS DOWN 3% IN PAST YEAR.

RAIN newsletter reports that Arbitron’s recently-updated “American Radio Listening Trends” report, shows a 3% decline in U.S. per capita radio listening over the past year — and a 16% decline over the past nine years.! (The nine-year trend includes a 25% decline among teens, but the downtrend is not just among young people: The nine-year trends also show a 19% decline in P18-34s, a 12% decline in P35-64s, and even a 12% decline in P65+.) Interestingly, despite the introduction of satellite radio, in-car listening is stable to slightly up for the nine-year period, whereas at-work and in-home listening are both down (26% and 24% respectively.
Posted by Jonathan Marks at Wednesday, February 20, 2008