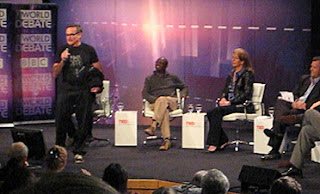 Megan Barnett over at Portfolio.Com blogs from TED 2008 currently underway in California. She actually touches on a growing trend - the BBC turns up with a crew to record one of its TV debates at a major conference (e.g. Davos or TED). The problem is that these TV debates are so different in atmosphere to the rest of the proceedings that they may be damaging the brand in the end, especially as people in the audience no longer have much of a thrill "being on television somewhere on the other side of the world". Having been at a taping of these debates a few times, although they are recorded as live, if they are used on World Service radio, there are some painfully slow sessions at the end of the taping which are simply to record links to introduce people on the radio (at the point where subtitles appear in vision). Watching the presenter doing this for about 5 minutes is not very entertaining. And, as in the case below, the danger is that the speakers quickly jump on their own hobby horses because they play to the camera not the audience.

That's what plenty of TED attendees muttered to themselves last night when a special BBC America taping with a panel on new media went technologically awry just moments after starting.

After a few awkward moments of witty banter among the panelists, who included Sergey Brin of Google, the journalist Carl Bernstein, Queen Noor of Jordan, psychologist Dan Gilbert, and African journalist Andrew Mwenda, a heckler spoke up from the back of the room.

The crowd hushed down as soon as it realized who was doing the heckling: attendee Robin Williams. It being Robin Williams, it didn't take much cheering from the crowd to get him on stage. He then spent the next 15 minutes doing improv standup comedy to an eager crowd and an embarrassed BBC America staff.

"A new internet service in Israel is called Netanyahu." "Sergey Brin: started in garage and now he owns everything." "So, how much money have we raised so far?" And on and on, in the way only Robin Williams can do.

The BBC finally got its technological ducks in a row (Williams: "This is supposed to be a presentation on new media?"), and the panel went on.

If only it had ended on that high note. The hour-long panel (was it really just an hour?) on a potentially provocative subject proved to be largely a disappointment. Each panelist seemed to want to talk about something different, and the moderator couldn't quite hold it together.

In a complete reversal at one point during the Q&A, one of the panelists, Mwenda, asked one of the audience members a question. He wanted to know if Forrest Whitaker had a different impression of Uganda from the media before he went to the country to research his role for his Oscar winning performance in The Last King of Scotland.

Whitaker's answer was eloquent and thoughtful. But it still had nothing to do with new media.
Posted by Jonathan Marks at Thursday, February 28, 2008