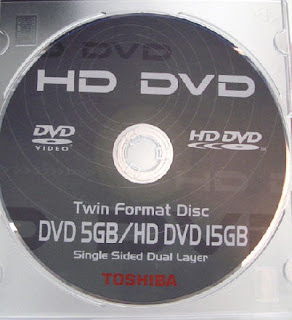 I thought Toshiba was smart. So they lost the HD DVD format war. Everyone is abandoning the format as though it were bird-flu. Toshiba PR is still putting out " we're still undecided" messages to the press. Memo to Toshiba management - it's dead, decide, cut production and move on. Oh, and fire the PR guys who keep spinning this nonsense.

We will assess the potential impact of this announcement with the other HD DVD partner companies and evaluate potential next steps. We remain firm in our belief that HD DVD is the format best suited to the wants and needs of the consumer.

Update: Tuesday 19th AM in Tokyo, Toshiba officially pulled the plug in March. 1 million players sold worldwide, some as part of a X-Box deal. Wonder if there will ever be a Blu-Ray add on for the X-Box? Probably not.
Posted by Jonathan Marks at Monday, February 18, 2008