Cruyff is back - no more mister nice guy 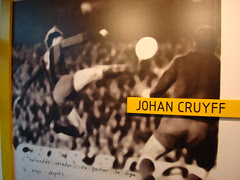 FC Barcelona Boutique
Originally uploaded by Jonathan Marks
Former star player and coach Johan Cruyff is to return to Ajax football club to totally review their football
policy. His surprise appointment today is part of a
shake-up at the Amsterdam football club which will also see the three current supervisory board members step down at the end
of the season, according to news agency ANP.

The reorganisation follows a highly critical report into Ajax’s management since the club was launched on the stock market
in 1998. The report highlighted several management failures as part of the reason why the club has under-performed in the
last few years. Over the past decade Ajax’s purchases on the transfer market have largely been a failure and the club has wasted millions of euros on misguided talent schemes in Africa and Belgium. The last time they won the premier league was in 2004 and its performance in European competitions has declined steadily since the mid-1990s. Ajax is to set up a new management structure. It is unclear what will happen to the current executive board, which also came under ire in the report. With the appointment of Cruijff, it seems increasingly likely that national Dutch coach Marco van Basten will become the club’s new trainer when his contract ends after the European championship this summer.
Posted by Jonathan Marks at Tuesday, February 19, 2008