Get out of Media - Ad Age 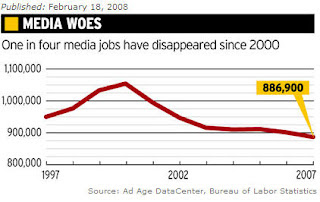 Media employment in the USA in December 2007 fell to a 15-year low (886,900), slammed by the slumping newspaper industry. But employment in advertising/marketing-services -- agencies and other firms that provide marketing and communications services to marketers -- broke a record in November (769,000). Marketing consulting powered that growth.

Here's the reason behind the disparity: Marketers still invest in marketing, but they have options far beyond paid media: digital initiatives, direct marketing, promotions and events, just to name a few. That creates more opportunities for consultants to help define strategies.

Agencies also have adapted, expanding beyond simply creating and placing ads. Indeed, Ad Age DataCenter research has shown that U.S. marketing-communications agencies collectively in 2005 for the first time generated less than half of their revenue from traditional media and media planning/buying.

Falling stocks
Want more evidence of tumult in media? Consider performance of stocks in the Ad Age/Bloomberg AdMarket 50 since May 2002, when U.S. measured media spending began to recover from the last recession. Since then, four of five agency stocks and 15 of 26 marketer stocks have risen. But a majority (11 of 19) media stocks have fallen.

Among all the ad-related job sectors, the hot spot is marketing consulting. Employment in that field in December reached a record 148,500, accounting for the lion's share of job gains over the past year in advertising and marketing services.

Below the bubble
With the notable exception of marketing consultancies, employment in advertising/marketing-services sectors remains below sectors' historic highs (hit mostly in the 2000 bubble). Ad-agency staffing, for example, is 10% below its 2000 peak; employment at PR agencies is 11.5% off its 2000 high.

Still, ad/marketing-services sectors have rebounded from the ad industry's January 2004 post-recession employment nadir. Advertising/marketing services has added 106,000 jobs since then; marketing consulting accounted for nearly half (48,200) of those gains.

It's a different picture in media. Since media employment peaked in dot-com-infused 2000, media companies have eliminated one in six jobs (167,600).

Newspapers, TV and radio all cut staffing last year. The only media sectors to add jobs: magazines (up a meager 400 jobs) and internet media companies (up 9,200).

The big problem is newspapers, which account for half (82,800) of media jobs lost since 2000. One in four newspaper jobs have disappeared since newspaper employment peaked in 1990.

Newspapers, saddled with heavy costs of printing and distribution, last year accounted for 38% of U.S. media jobs, down from 50% in 1990.
Posted by Jonathan Marks at Monday, February 18, 2008