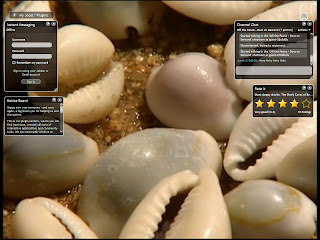 Niklas Zennstrom and Janus Friis were the brains behind Skype - and having sold it to Ebay are now working on the next project - which today has changed its name from the Venice Project to Joost. They must have been waiting for enough people to have broadband so that the viewers become the network. The problem with current streaming software on the web is that you can quite easily become victim of your own succcess if too many people download video fromyour site - and most streaming software has a limit to the number of concurrent users. In under a year, the Joost website reports, they've grown from a handful of people to more than 150, establishing offices in five countries.
Having been a beta tester for a couple of months, I am amazed at the quality versus bandwidth. Yes, the software downloads about 320MB per hour (as a maximum) and uploads up to 105 MB per hour. Just like Skype, you are not only downloading, but passing on video to others. You do this without noticing....the client sits in the system tray and doesn't appear to slow things down. They say that the number can be as low as 220MB per hour of viewing, though my average is around 290 MB watching full screen.
On the content side, I see Boom Chicago and MTV are on board. Its old stuff, but it is good stuff. And there are some wildlife documentaries on their - animals don't ask for performing rights. I suggest some public broadcasters need to get involved too, especially if they are interested in reaching people below 30 years of age. Wonder if the BBC i-Player will be part of this concept, or evolve into a competitor for the UK market. Channel 4 also is doing more and more on line.
The blog also answers the question why the called it the Venice Project. Nothing to do with canals or beaches. It was the name of the conference room at the hotel they were staying at. The first and main production data-centre in Luxembourg City. These guys are going to get more column inches than Second Life once it gets going.
Posted by Jonathan Marks at Tuesday, January 16, 2007

Email ThisBlogThis!Share to TwitterShare to FacebookShare to Pinterest
Labels: Joost