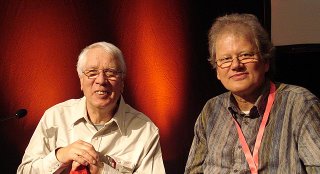 Had dinner with two very interesting people last night, and watched them perform at 12.30 today. Peter Jenner, on the left, was part of Blackhill Enterprises, which managed Pink Floyd, Syd Barrett's solo career, Marc Bolan, Roy Harper (whose records Jenner also produced), The Edgar Broughton Band and The Clash. Peter currently manages Billy Bragg. He also is chairman of the IMMF and ELMF. he is the recent author of a report called Beyond the Soundbytes. Peter Jenner may be 64 years old - he has fresh outspoken views on the music business, which not only criticize the big labels, but also provide practical solutions as to what needs to happen next. His stories about trying to manage Pink Floyd, as well as the Clash were classic - also showing the hard realities of the music business. Those who survive do because of passion, not because they're going to earn big cash. Peter believes that anyone who signs a world-wide contract with a major label these days is being deluded - they will not be famous, simply controlled.

He was intereviewed by Tapio Korjus (Rockadillo Production Oy, Finland)
Tapio Korius has known Peter Jenner for 30 years and they have worked together on acts like Roy Harper and The Clash. Lately the two managers have been collaborating in IMMF and European Live Music Forum. He too, was full of stories at the dinner table.