Have Your Say in Video 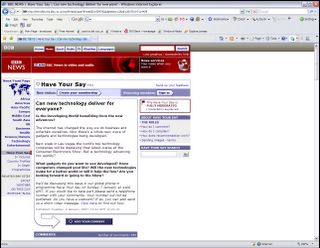 Got invited to become involved with the technology debate currently going on at this website run by the BBC. They are trialling webcam software from a UK company called All New Video based in Newbury in the UK.

Once loaded in an IE7 browser (doesn't work with Firefox 2.0 yet), you can contribute to the BBC show with a live mike or webcam. You can also record a 1 minute contribution or statement. I thought the insructions on what you had to do by the BBC News 24 presenter were a bit "fierce" for anyone who hasn't done this before, but they are clearly moving along the right lines. Last time I saw something like this was Streampower in Paris, with the great show called "cult". My contribution may be used in today's show at 14 UTC on BBC WS radio, BBC World TV and on-line.