Earth's Aurora's are not mirror images 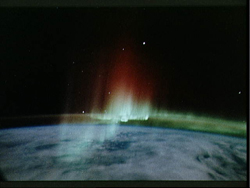 Having watched many Northern Lights (and one Southern Lights in Australia), I am fascinated by these dancing curtains of colour. This week came news that scientists looking at the Earth's Northern and Southern auroras have been surprised to find they are not mirror images of each other, as was once thought. The main cause behind the differences appears to be the interaction between the Sun's outer atmosphere and the Earth's magnetic field.

Analysis of the images from NASA's Polar spacecraft and the Imager for Magnetopause-to-Aurora Global Exploration (IMAGE) spacecraft showed how the auroras move and change, based on the tilt of the Earth's magnetic field toward the Sun and conditions in the Solar Wind.

By knowing how auroras react to the solar wind, scientists can better determine the impacts of space weather in the future. The new discovery by scientists from NASA, the University of Iowa, Iowa City and the University of California at Berkeley, shows that auroras may be more complicated than previously thought.

The Sun's outer atmosphere is an extremely thin electrified gas, or plasma, better known as the Solar wind, since it blows constantly out from the Sun at around 250 miles per second. The Earth's magnetic field provides an obstacle in the solar wind flow and becomes compressed into an extended teardrop-shaped bubble known as the magnetosphere.

Stubbs and his colleagues used data from the two spacecraft to study the auroras. By luck the orbits of Polar and IMAGE were aligned so the entire auroral ovals in both hemispheres could be observed simultaneously in detail. Stubbs and his colleagues noted four important items in their study of auroras observed in October 2002. As predicted, they observed the auroral ovals shift in opposite directions to each other depending on the orientation of the Interplanetary Magnetic Field (IMF). The IMF is the Sun’s magnetic field that travels out into space with the solar wind.

They noted the auroral ovals also shift in opposite directions to each other depending on how far the Earth's northern magnetic pole is leaning toward the Sun.

What was most surprising was that both the northern and southern auroral ovals were leaning toward the dawn (morning) side of the Earth for this event. The scientists suspect the leaning may be related to imperfections of the Earth's magnetic field. The Earth has a similar type of magnetic field to that which occurs around a simple bar magnet, which causes iron filings to arrange themselves in loops around it.
.