Gary on Storytelling in a ADD world

I will always remember chatting at several conferences to Gary Vaynerchuk. Great guy. What you see is really what you get.

He went from running winelibrary.com to building a modern advertising agency that currently has 250 employees and 22.5 million in revenue. He's just given a talk about storytelling in a ADD world. NOTE: His presentation style is blunt and contains adult language. But what he says is spot on. It's all about the context.

I still believe there is a huge future for epic entertainment alongside breaking news. Because as Gary point out, everyone is search of different ways to share a story. The only challenge is that there's a lot of noise out there!

In the presentation above, Gary also picks up on a point I saw Tom Foremski make a few months ago.

Tom is one of the few tech journalists not mesmerized by the hype of Silicon Valley PR machines. He correctly predicted that every company would become a media company, pointing out that Google, Twitter, Yahoo and Facebook are all (trying) to transform themselves into media companies, adding content to their portfolio.

He's also been one of the few to spot a serious problem developing in the current Google strategy. Adsense is tanking - seriously! 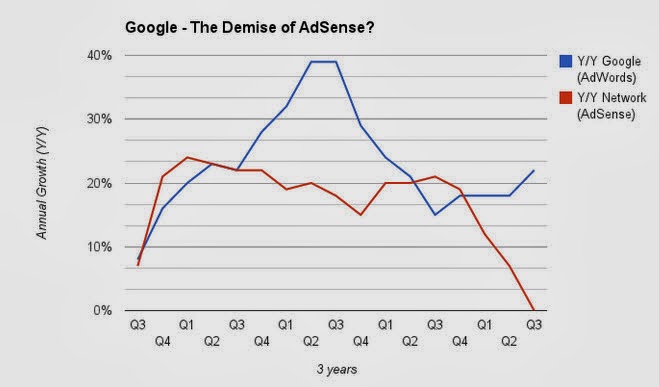 Google's IPO was one of the most successful in history and it sparked a new interest in tech stocks, which led to a boom in startups.
But is AdSense shrinking because of Google's war on spam and pirates? Or, is it reflecting deeper issues with online advertising that could become serious problems with Google's advertising business?
AdWords grew 20% but how much of that is due to "advertising policy changes" imposed early this year that require customers to buy mobile ads even if they cannot monetize that channel? It increases costs for advertisers and their cost of conversions so it could backfire for Google if some accounts that were not performing that well now get pushed into closure.

There are serious issues with online advertising affecting the entire industry. Google has reported declining value from clicks on its ads. And the shift to mobile ads is accelerating the decline, because it produces a fraction of the revenue of desktop ads.

Digital publishing is headed off a cliff … There's a five fold gap between mobile revenue and desktop revenue… What makes that gap even starker is how quickly it’s happening… On the industry’s current course, that’s a recipe for disaster.

Google has been pushing to diversify. It used to get 98% of its revenues from advertising but in Q3 16% came from other sources, such as enterprise IT, and mobile phone sales.

However, those businesses aren't as profitable as advertising. Its smartphone business lost a whopping $1.08 billion in 2012, and losses in 2013 totalled $645 million.

The failure of the search algorithm…

Google's AdSense network is more profitable than its phone business, which is why it will have to somehow resurrect it despite the spam. The decline of AdSense says more about Google's ability to fight spam than anything else. It should not be sending traffic to spam and scraper sites in the first place but that's because its algorithm doesn't measure up to its hype.