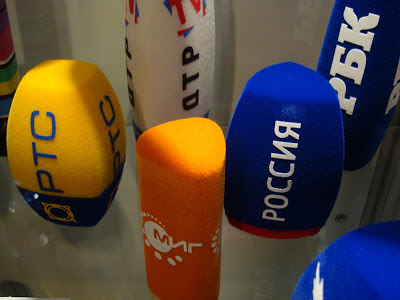 I'm reviewing radio's future for a couple of clients. In that regard it was interesting to read the texts of the top 10 radio commercials in the UK. Actually you have to listen to them to  understand why they work - it's a combination of a great story matched with good acting and relevant effects. The problem is that work of this calibre has become so rare. Can you recall the ads you heard on the radio yesterday? No of course not. Because they were shouts not stories. And they're unlikely to be on YouTube or Soundcloud so you can't share them with friends.

Following a tip from the December Earshot Creative Review, (highly recommended as always) I started exploring the great database of parody videos and audio clips produced by Brian McColl and  Bren Russell who run the website called Gremlins in the System.

In my work with radio stations searching for a sustainable business model, I've found the best way to explain good practice is to use examples of bad practice. Vincent Flander's site is one of many excellent resources.

And UK TV critic and writer. Charlie Brooker made very funny episodes about the real life behind many TV production companies.

His take on TV news packages has also become a classic.

But when it comes to radio, I'd argue that the best examples of what's wrong with a lot of modern radio are in the Gremlins digital dungeon in Ireland. The stations have focuses on filling airtime as cheaply as possible, becoming slaves to transmitter and the clock on the wall.

More radio students and station managers need to listen to this.

Amd when you create a great radio commercial, make sure you pick the right voice.

And ask a media student to write the copy. Where's the craft in radio ads?


Radio people are often poor with the written word. It's why they are on the radio. Because good written copy sounds terrible when its read out loud. And scripts look rubbish on the screen.


Rolling radio news in the worst. It's breakfast TV without the pictures. None of the presenter's banter makes sense because none of it is theatre of the mind. My vote for the worst programme of this type is Newsday on BBC World Service. Try and listen to it live. Because finding anything later is simply impossible. And they're still in denial I am afraid.

And this interaction with a caller is too typical.

Social Media is not radio's friend if it's used like this.


And many station promotions are so low budget as to be worthless.

So what's wrong with music stations?

While you're laughing remember that all this formulaic nonsense is what's killing radio. It's no wonder that advertisers are moving to other media. No real story = no real point. Audiences need to be at the heart of everything we do.