Kony 2013 - How quickly we forget the Invisible

It's fun looking back at 2012 and reading what others found to be the highlights. But I note that events older than a couple of months rarely figure prominently. My theory is that, without the aid of media to remind us, we have a collective memory for current affairs of about 6 weeks. So I don't see the KONY 2012 project mentioned anywhere. Remember this viral video?

I note that the counter on YouTube is currently at 95,739,821 views. But when I see articles this week indicating that YouTube is revising down the number of page views claimed by record companies (by a collective billion views) then I begin to wonder whether 95 million people really watched this documentary all the way through or whether some clever software didn't help to boost the numbers. But even if the number of pageviews is really half that being claimed, it is certainly one of the most successful videos on Youtube, especially as Gangnam Style (now on 1.08 billion views) is not a documentary with a call to action.


And then we had that weird report of the Kony Founder, Jason Russell, being arrested on March 15th 2012  for screaming at traffic while being naked. Since then, not a lot of positive news about KONY.

Until now, when around 8000 people have been curious enough to watch the end of the year report.


The idea for the awareness and action campaign was actually around a lot earlier when the US organisation Invisible Children set up an early warning tracking radio network in the area where Kony and the Lords Resistance Army are believed to be hiding. It uses ham radio gear operating on shortwave (around 7 MHz) to link villages. There's also a separate network of 6 FM radio stations broadcasting regular messages from ex-LRA members encouraging them to defect. Invisible Children helps to construct stations and/or otherwise fund the transmission of the "Come Home" message. They're hoping to raise a further 100,000 dollars in 2013 to fund further expansion.

They also run flyer campaigns reminiscent of the way the US military (psyops)  have run pamphlet campaigns over Iraq, Libya and Afghanistan in the past.


But what have we learned? 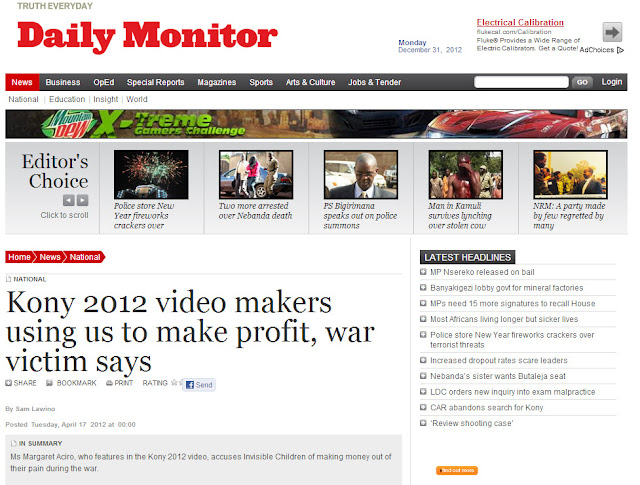