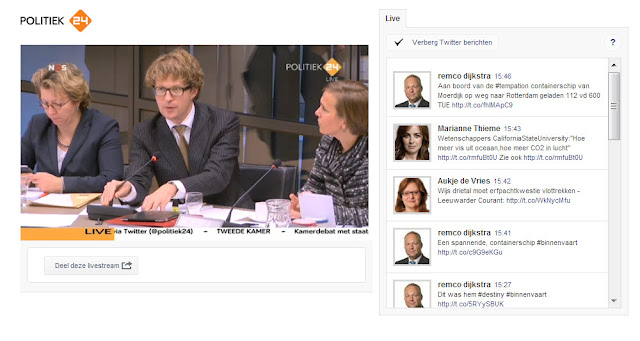 This is an extract from an earlier post, since there is a finally a debate going on in the Dutch parliament about the future of public broadcasting.

It seems Hilversum seems to be winning the battle against the regional broadcasters. That's because the VVD doesn't understand that the folding the regional network into a national network won't work. It really needs to be the other way round. Otherwise all the regional programmes go national. I get the impression that the Media Fund isn't going to survive in its current form after 2017. But hopefully, some agreement will be made about input from independents. 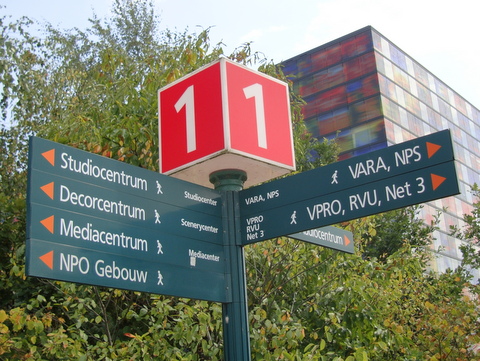 
There was a lot of talk in June 2011 when the previous Dutch cabinet issued a 39 page letter to parliament explaining its plans for drastic changes to Dutch public broadcasting, regional, national and international. Time for an update.

The fall of the Dutch government lead by Mark Rutte on 21st April 2012 meant that civil servants and politicians stopped talking in public about the reform plans. But clearly planning has been going on regardless. With the formation of a new purple coalition between the Labour and Liberals, the negotiated agreement for the Rutte 2 government have now been published (in Dutch of course). There are two bits about media in this document which struck me (my translation).

Media. The (public) media policy guarantees an independent, varied and high quality offer, accessible to all layers of society. The current policy will be changed on a number of points.

1. The 13 Regional broadcasters will no longer be financed by the provincial government, but by the national government as part of their public media budget (also used to finance national public radio, TV and Internet operations). Cooperation between the regional broadcasters (who fall under the ROOS) and national public broadcasters (NPO and NOS), as well as the integration tasks, will lead to savings. These are estimated later in the same document to be 25 million Euro, with budget reductions to be completed by 2017.

2. We will reconsider the need for a Dutch Cultural Media Fund. The fund to stimulate press and print innovation will remain.

So what could this mean? First a little context on the current situation.

If you live in most parts of the Netherlands you have access to four publicly financed TV channels. Three are national, one is regional. The regional TV broadcaster gets its money from the regional government authority together with some advertising revenue. The three national networks get their budget from public taxation as well as advertising blocks. Remember this small country also has 7 national commercial TV channels plus nearly 50 other commercial TV networks that target the Netherlands with their (subtitled) content. Think of National Geographic or Discovery as well as some local commercial TV operations. It’s a zoo! And the market is totally saturated. Advertising revenue is under pressure (especially on radio).


If you scan the TV channels (especially during the day) you’ll see that a country of 17 million cannot hope to generate enough relevant public content from within the Netherlands to fill four channels creatively. On the regional channels you’ll find a lot of webcams watching presenters in radio studios like the example above. At other times, these regional stations make between 30-60 minutes of original regional material a day and repeat it in a carousel format for the rest of the evening and into the following day. What some of them like Omroep Brabant, Omroep Fryslan and RTV Rijnmond make is generally good by international standards. Their costs for radio and TV production turn out to be a fraction of their counterparts in neighbouring countries. Some of the larger stations used to do quite elaborate outside broadcasts (usually at cultural events) but that has been severely curtailed in recent years.

But there are also exceptions. I think still think that AT5 in Amsterdam is more chaotic than I have ever witnessed in any capital city. But apparently they are reorganising. 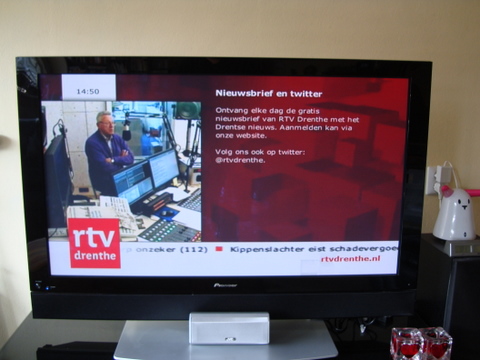 From Four to Three

Dutch public radio and TV carry commercials. The argument from the commercial broadcasters and the press is that they distort the market.  The right-of-centre political parties, most notably the VVD, have said for decades that they want to reduce the number of national channels from three to two, making them commercial free. This is often referred to as the BBC model, even though it’s a model that the BBC was using in the 1970’s. Some people in the Netherlands think the BBC is still growing. In fact it is implementing a 16% budget cut at the moment.

In the letter of June 17th 2011, the previous Dutch government said it planned a slightly different tactic. They would effectively broadened their cutting lens. Instead of reducing the national channels from three to two, they have included the regional networks, in effect going from four to three networks.

Now the new Dutch government, Rutte 2, has announced this integration is going to happen, with the regional broadcasters looking to save 25 million Euro a year when the project is completed.


Who will win control over the third network?

Since the regional TV distribution network has been designed so that viewers in Friesland see different programmes than in Rotterdam, it makes sense to retain this network when it fuses with the national networks in Hilversum. That means the existing Nederland 3 network becomes surplus to requirements. Since commercial TV networks have managed to blossom without building any terrestrial infrastructure like DVB-T, there doesn't seem much value in selling off the network. I guess it will go dark.

I believe that if Hilversum gets full editorial control over the "new" third channel, it will mean that regional journalism is going to suffer the most. The national broadcasters always look for ways to cut at other places first before they look at themselves. I would argue that national broadcasters (like the BBC) have never really understood how to run regional small-scale production centres. When cuts come, they always affect regional/local stations first. And there's a definite heirachy between those who work in regional and those who work nationally. Of course, there is also a lot of pressure from local newspapers who are trying to run a commercial model in the face of plummeting subscriber numbers. They regard local public newsgathering as unfair competition.

Ideally, the new public TV structure in the Netherlands would borrow more from the situation in Germany. Nederland 1 and 2 would be national. Nederland 3 would be a primarily a regional information network, carrying national productions (think of specialist interest) at other times. It would be a federated system. Factual news and current affairs coverage would remain in the hands of the regional centres. The other programming would be coordinated at a national level, probably by the NTR. The battles to come will involve who controls and commissions the schedule. Although, as more and more viewers are switching to on-demand, the discussion becomes more one of how to best organise how quality production rather than squabbling over who has rights to "prime time" or what constitutes a "public sport". I find the reaction from Hilversum to these government cuts to be poorly argued, confusing a discussion about being popular with explaining a role of what's meant by public.


Last year the Dutch government announced it was shaving up to €127 million off the national TV/radio budgets, demanding that broadcasters merge rather than co-operate, though not offering a financial incentive for anyone to do so. It wanted to bring the number of public broadcasting production houses back to 6. That plan was cooked up in Hilversum.

Now, the new Dutch government has announced another €100 million is coming off the public media budget. That includes closing that separate Cultural Media fund of 16 million Euro which has been used to stimulate independent producers and film-makers to do more investigative journalism as well as creative cross-media projects. Not surprisingly, money set aside to stimulate the commercial press has not been scrapped - right of centre commercial media has always been close to the VVD. But this decision smacks more of an unfair disadvantage to the independent production sector rather than bashing public broadcasting.

Rather than just scrapping the Cultural Media Fund, I would be inclined to rethink commissioning and innovation as a whole across national public broadcasting, especially as the old public broadcasters like the TROS, AVRO, VPRO are becoming more and more like publicly financed production companies, with a production guarantee. I think only NOS, NTR, ROOS network and NPO are public broadcasters in the true sense because they have direct access to the airwaves. NPO commissions content from what have effectively become "public-financed production" companies like VARA, BNN, TROS, etc. NTR looks as though it will get the job of commissioning stuff from the aspirant broadcasters like WNL.

If you don't earmark some money for experiments and innovation, then believe me it will disappear into more mindless magazine shows to fill traditional airtime. The Mediafund has been one small light of hope in the acidic cloud of despair and creative collapse that has destroyed Hilversum as a creative centre in the Netherlands. Killing that fund off, while retaining money to keep newspapers alive is sheer stupidity. And as I pointed out previously, Dutch producers need to understand that they will have to consider international markets in order to survive and grow. The Dutch market is becoming too fragmented and public opinion is dead against any subsidy models as we go through the second great depression.

Gradually I think we're moving towards a system not unlike the UK channel 4 construction. This publicly-owned corporation (set up by Margaret Thatcher) has money but no programmes, production companies bid for tenders to fill the clearly defined slots. Production companies  like the VARA, TROS which are really large "loyalty schemes" because they have a membership will compete against Endemol for slots. Because this kind of membership system will collapse (why pay an extra 15 Euro a year when these membership organisations are strictly limited in what they can do for their membership), the Dutch government has further marginalized their power and influence in Dutch society. That was definitely what the VVD has been trying to do all along.

What I still don't understand


It is true that Endemol, Talpa etc have done a lot to innovate in game shows building a world-class reputation in this sector. I see lots of innovation in the games development sector and interface design as well. But when it comes to factual content creation, the great public science experiments, comedy driven factual programmes (like Qi), cross-media documentaries, and major investigative journalism formats are all being developed elsewhere in the world. Not surprisingly, the Dutch Media Hub has failed in trying to get foreign investment in the Netherlands without the right mix of technology, creatives and marketing. Because, just having two out of three spells disaster. With the bankruptcy of the Media Park company TCN, I'm sure some broadcasters will rethink if they really want to stay in Hilversum.

I still find it incredible that with the creative sector being so important to the Netherlands, that there is no public debate on its future. Yes, there is a debate by incumbents in public. But there is no public consultation period in this country like you see conducted by Ofcom or the BBC Trust in the UK. We need the equivalent of OurBeeb.com. Public broadcasting in the Netherlands has a long way to go before it does things with the public rather than making programmes for them.
Posted by Jonathan Marks at Monday, December 10, 2012

Email ThisBlogThis!Share to TwitterShare to FacebookShare to Pinterest
Labels: mediadebate