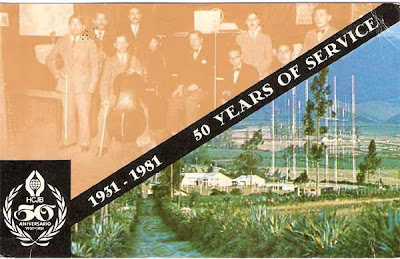 Just found a bit of nostalgia in a cassette box. 1995 expedition to Quito South America.

Amazing how history repeats itself in international broadcasting. At the start of December 1995 we reported that BBC World Service has to cut back by 5.5 million pounds in 1996. Interview with Caroline Thompson, then with the BBC WS management. 10 languages were threatened at that time. BBC has also been testing a mediumwave transmitter in Slovakia.

We also reported from a field to the East of Quito in the antenna farm of HCJB. Jonathan Marks attended a conference of local broadcasters in Ecuador and took a side trip to meet those behind a station he'd heard in Europe from the early 1970's. They were also testing a 26 MHz antenna. There are two weather problems - either winds or lack of rain. HCJB also build 100 kW shortwave transmitters as well as small FM transmitters.

The sound file is in the vintage vault.
Posted by Jonathan Marks at Saturday, February 12, 2011