This programme from the archives looks at Kerbango, the Internet radio that (with hindight) never was.At the last count there were three devices promised on the world market to allow you to listen to internet audio on a separate stand alone device. A few days ago (in Feb 2000), a California based company, calling itself Kerbango, showed the prototype of a special radio to be launched in a few months and which is styled a bit like a valve radio of the 1950’s. We asked Marc Auerbach, who’s Vice President of Marketing, why their approach is different.

Clement Stokes of Springfield,Durban in South Africa is a regular listener to this programme via the relay on SAFM on their domestic service. Two weeks ago he heard us mention that today we’d be testing one of the new Worldspace receivers. He is particularly curious because he sees the radio advertised in a hi-fi shop not far from his house, although he points out only one South African broadcaster is so far participating in the scheme. The question is simple, does the performance justify the price of more than US $300 . So we explain our findings on the Hitachi KH-WS1, one of four radios on the market in Southern and West Africa designed to pick up the proprietary Worldspace radio system. I still have the radio on my window sill, but the Worldspace feed is dead. Rather expensive FM radio!. 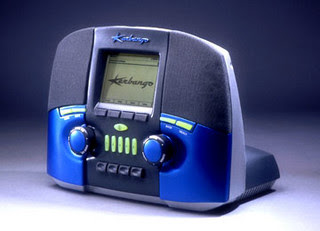 Email ThisBlogThis!Share to TwitterShare to FacebookShare to Pinterest
Labels: kerbango