In Berlin at the House of World Cultures 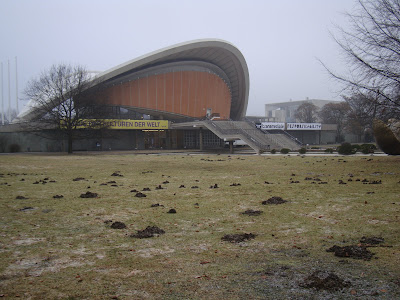 It's bitterly cold today as I make my way from my hotel in Alexanderplatz in the former East Germany to the conference centre not far from the Zoo in the bit that used to be the West. In fact the building was put up by the Americans. It was formerly known as the Kongresshalle conference hall, a gift from the US, designed in 1957 by the American architect Hugh Stubbins Jr. as a part of the Interbau exhibition. John F. Kennedy spoke here during his June 1963 visit to West Berlin.

Wikipedia tells me that on May 21, 1980 the roof collapsed killing one and injuring numerous people. The hall has since been rebuilt in its original style and reopened in 1987 at the 750th Berlin jubilee. To Berliners it is also known as the Schwangere Auster ("pregnant oyster")

I'm here to debate radio's digital future and some of the pathways the non-profit sector could use the spectrum to their own advantage. Impressed by the turnout and the level of discussion, both during the morning and afternoon sessions. Found some members of the audience subscribe to my old Media Network podcasts.