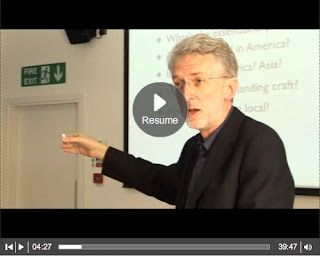 Have been comparing some of the talks given recently on the future of journalism. With paper circulation figures dropping in many countries (though there are exceptions like the Telegraaf in the Netherlands), having a strategy has never been more important than now. I like the way Jeff Javis talks through the options to members of the Guardian teams. So many talks recently have been the rather tired "User Generated Content is going to finish the Biz" line. UGC is one form of collecting contributions, but the future of many organisations is more linked to their wider role in society/community than just raw input from a tiny group of active contributors. Most people tell boring stories. Watching and listening to them is like watching paint dry. Jarvis is a cut above the rest (see video).
Posted by Jonathan Marks at Wednesday, July 02, 2008