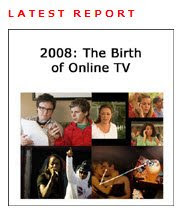 Colin Donald and Özlem Tunçil, co-founders, of Futurescape have come out with a new 30,000 word publication covering Online TV production in UK and USA. At last something written by people who have passion for this emerging industry - and who clearly want to cut through the hype.

The face of television is being transformed by Internet programming with radically
different formats and interactive features. In America and Britain, hundreds of comedies and dramas are currently in production, inspired by the massive and controversial success of Lonelygirl15. New business and production models are emerging, particularly for advertiser involvement in product integration and branded entertainment. This report provides a comprehensive, in-depth analysis of all aspects of the market to bring readers up to speed as rapidly as possible. It includes interviews with:

Marc Campbell: Founder and CEO of the Independent Comedy Network, a new studio that is aiming to launch 40 shows by the end of 2008.

Brad Curtis: SVP Business Development, Science + Fiction, an agency that produces branded online television shows, such as In the Motherhood.

Kathleen Grace: Co-founder of independent production company Dinosaur Diorama Productions, which made hipster satire The Burg, and are now producing The All-For-Nots, a comedy about an indie band on tour, with Michael Eisner’s Vuguru studio.

My verdict - one of the better ways to spend US$500 if you want a company briefing about emerging on-line TV production. If I compare these reports with what the mainstream consultancies are doing for 10 times the price, then I know immediately who I support - these guys. At last something that takes a few steps back from the hype - but also shows there's some really creative stuff going on. Compare this to the kind of nonsense we have seen published by banks on the creative media market recently. (no connection with these guys by the way - just a fan of what they do).
Posted by Jonathan Marks at Thursday, July 24, 2008