Doc Searls on the future of free-to-air radio 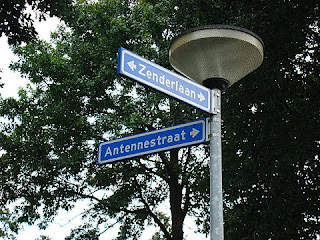 Don't quite agree with Doc that over-the-air FM is finished quite as quickly in Europe as it appears in the US. I'd give it another 20 years. But AM is going to disappear a lot quicker than that - simply due to spiralling energy costs. One religious station is paying around 100,000 dollars a month to keep a 200kW AM transmitter running. Their future is just a series of rescue attempts.

But I do call my iPod Touch a radio. Great listening to the streams of audio over the wifi network. works perfectly. I'll wait for them to iron out the bugs in the iPhone 2.0 before I fork out. The Nokia N95 has a much better camera - and the audio is brilliant too. More from Doc here.

The photo, by the way, is local. There is an antenna street, and a transmitter lane, in my town. That's because between 1937 and 1957 the old wooden rotatable masts of PHOHI/PCJJ, (later Radio Netherlands) were located here. You may remember they built a 1/5th scale model of the towers on a roundabout on the outskirts of the town. Still there. 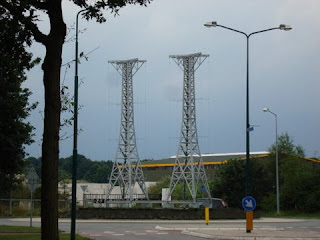 Near the end of the run of Media Network, I started listening to the Real Audio and MP3 versions rather than using shortwave. It was a lot nicer that way, even though bypassing shortwave saddened me a little. I think that streaming audio is probably the future for radio, but it's too bad that it requires a fast Internet connection.

Thanks for picking up the thread, and sorry if I suggested that over-the-air radio is dead, or even dying. What dies, and where, will largely be a matter of local economics, as you point out. There is still plenty of AM (MW), SW and even LW listening in the world. And FM is still doing fine in most places as well. Where there is no other way, transmitters will survive, as long as they're affordable. But, as you point out, that's the rub. Big energy is expensive. A 200kw LW or MW transmitter sucks about twice that much off the grid. That's a huge bill. High powered FM and TV stations obtain ERP, or Effective Radiated Power by stacking antenna bays and concentrating energy toward the horizon, where the listeners and viewers are. Even so, if all the listeners and viewers can be reached more easily over mobile devices shifting seamlessly from the cell system to random wireless Internet connections, a point gets reached where the economics of streaming become more attractive than those of transmitting.

Our job at ProjectVRM is to change the economics of radio and TV by putting the listeners and viewers in charge not only of what they consume but of how they pay for it and how much they are willing to pay. It's a fun challenge. If it works, all these stations will have much better data to go by, and much better relationships with their listeners and viewers.