I know from my father, Ellis Marks, a plant geneticist at John Innes Institute in Norwich until 1984 just how little we all know about the extremely complex world of GMO's. We may understand a bit about what goes on inside the plants. But not the ecosystem we're interacting with. There is also regular coverage of Monsanto on the great Noagedashow,com podcast. So seeing this story from Candida McCollam is frankly, pretty frightening.
While more than one quarter million opponents of H.R. 933 signed their names to a petition in an attempt to pre-empt President Obama from signing this continuing agricultural spending bill dubbed the “Monsanto Protection Act” into law, sign it he did.  And I find it terribly incongruous that buried deep inside this new law is a provision that protects the Monsanto company—the world’s largest seed company—from any future litigation, regardless of harmful effects discovered in their GMOs or GE seeds.
While food products containing the harmful genetically modified organisms (GMOs) —already banned in many countries—produced by Monsanto may not be found on the White House Menu—or in Michelle Obama’s healthy garden—why then, and despite public demand for food safety, are U.S. consumers being subjected to a dual standard?
While you may not be current on food safety issues and concerns, or FDA mandates and legislation, the visual depiction of the Monsanto GMO story (shown in the NetBase social media intelligence analysis below) offers up fast, reliable social PR forensics that reveals a disturbing reduction in food safety controls aimed squarely at both Monsanto and the Obama White House.
This Monsanto-GMO blog is a “listening” exercise in social forensics that shows a picture is worth a thousand words. 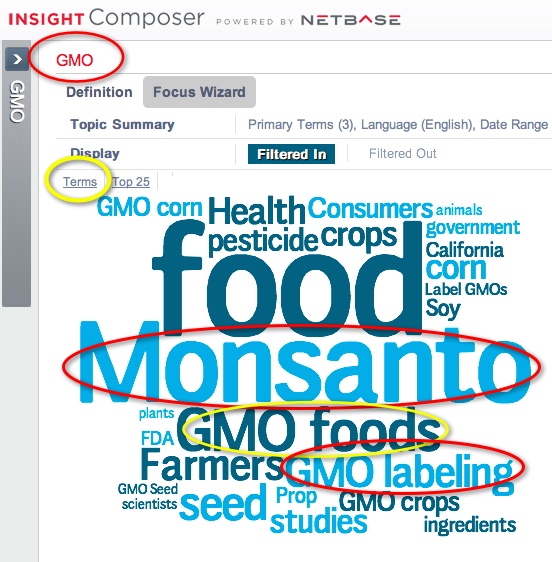 In listening to a year’s worth of data on the subject of GMOs, a single company—Monsanto—is filtered among the top 25 terms.
This isn’t a new story, by far, but it’s one that begs the question as to why such a health-conscious White House would bend so easily to Monsanto and its powerful GMO lobby—despite the surge in healthy living principles espoused by local/state initiatives and medical authorities, as well as recent mounting consumer outrage about food contamination (Nestle) and dangerous additives (Kraft). It also is the story of a contradictory, if not biased “listening strategy” by the first Administration in history to win a second term—and by a landslide—on the strength of a social campaign strategy steered by sophisticated Big Data scientists and analytics.