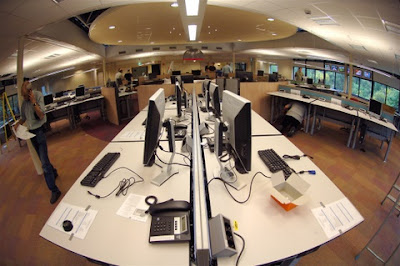 We'll probably find out very soon the fate of Radio Netherlands, Holland's external public broadcasting service. Looks to me like VVD and CDA are simply following the script set out in a very old and expensive 2003 McKinsey report which suggested turning the place into a "freedom station reaching difficult places". That would mean keeping the Caribbean department and a few language services to areas of Africa, Indonesia and maybe Latin America.

I see that the Dutch government website which used to host the report has taken it down. So, seeing as it has been in the public domain for so long, I'll put it back on the Interwebs. It's in Dutch. But if you're interested in the thinking about Radio Netherlands you only need to look at the three pages below. They concluded that up to 29 million Euro could be saved on the budget (in 2001) of 48 million Euro. A few months later a letter from the Raad voor Cultuur (The Dutch Arts Council) drew similar conclusions on Page 20 but suggested a phase out of activities.

The current budget of RNW is 49 million Euro according to the 2010 Annual report, though on Tuesday RNW issued a report suggesting its annual budget should be 36 million Euro.

Commercial network RTL reported later the same day that its sources in the Dutch cabinet say the announced budget will be more like 10 million Euro, which suggests to me that someone's been photocopying the old McKinsey Report. Not long now.