I got a call from friends in Washington DC last night working at a renowned Journalism college asking what’s about to happen in Dutch public broadcasting? Are there any lessons learned to be learned about what’s happening in this part of Western Europe? Yes. I think there are. Here's some of what I shared with them during a webcast briefing.

The Dutch cabinet has just issued a 39 page letter to parliament explaining its plans for drastic changes to Dutch public broadcasting, regional, national and international. There’s a parliamentary debate on the June 27th. The detailed report from the external consulting firm that’s being doing the math will only be released on the 24th. My guess is that no-one’s going to read that in the detail it requires. The debate will therefore be based on what’s already in the Minister’s letter. So let’s look at some of the detail.

If you live in most parts of the Netherlands you have access to four publicly financed TV channels. Three are national, one is regional. The regional TV broadcaster gets its money from the regional government authority together with some advertising revenue. The three national networks get their budget from public taxation as well as advertising blocks. Remember this small country also has 7 national commercial TV channels plus nearly 50 other commercial TV networks that target the Netherlands with their (subtitled) content. Think of National Geographic or Discovery as well as some local commercial TV operations. It’s a zoo! And the market is totally saturated.
If you scan the TV channels (especially during the day) you’ll see that a country of 17 million cannot hope to generate enough relevant public content from within the Netherlands to fill four channels creatively. On the regional channels you’ll find a lot of webcams watching presenters in radio studios. At other times, these regional stations make between 30-60 minutes of original regional material a day and repeat it in a carrousel-format for the rest of the evening and into the following day. What some of them like Omroep Brabant, Omroep Fryslan and RTV Rijnmond make is generally good by international standards. Their costs for radio and TV production turn out to be a fraction of their counterparts in neighbouring countries. But there are also exceptions. I think AT5 in Amsterdam is more chaotic than I have ever witnessed in any capital city. 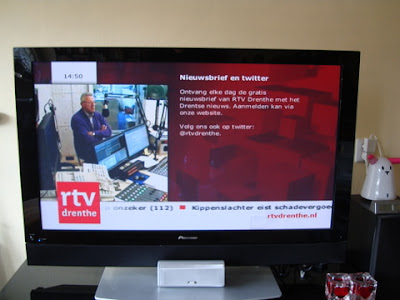 Commercial and Public sectors always at war
For as long as we have had commercial TV broadcasting in the Netherlands (it was 1989, after Albania!) the private sector has complained that the public broadcasters had an unfair advantage. Public radio got four national FM licenses for free, whereas the commercial sector went through an auction system just after the euphoria of the 3G licences. The major difference between a broadcast conference in the Netherlands and ones I attend abroad is that the Dutch always talk about infrastructure, money and marketing. Never content. There’s mutual mistrust between commercial and public and I don’t see any attempts to come to a truce. Contrast that with Scotland. I note that BBC Scotland and STV have made simple agreements about where they can work together (on technology, training, sharing of certain raw footage) and where they will compete (on content). I’m looking forward to being able to attend a workshop or mashup weekend where public broadcasters share some of the stuff I have already contributed towards making.

From Four to Three

Dutch public radio and TV carry commercials. The argument from the commercial broadcasters and the press is that they distort the market.  The right-of-centre political parties, most notably the VVD, have often said they want to reduce the number of national channels from three to two, making them commercial free. This is often referred to as the BBC model, even though it’s a model that the BBC was using in the 1970’s.
In the letter of June 17th, the Dutch government plans a slightly different tactic. They’ve broadened their cutting lens. Instead of reducing the national channels from three to two, they have included the regional networks, in effect going from four to three networks. I guess they’ll build regional opt-out windows into the Nederland 3 network. It remains to be seen if they retain the national network without the regional opt-outs, since this would compete with its regional variation.

Holland has had a unique public broadcasting system since the 1920’s. These were days of scarcity. So access to national airwaves was limited to broadcasting societies representing different strands of society as it was then (socialist, protestant, catholic, conservative/liberal) This fragmented system has become increasingly irrelevant as Dutch society has changed in its make-up, and the number of organisations producing programmes with public money has mushroomed from 4 to 21 This is impossible to govern, creates a sea of management and bureaucracy, each with its own agenda, all to the detriment of creative programme making. It’s always been the case that programme makers from different organisations have worked together perfectly, while their bosses have public battles competing for the public funds. Holland’s unique public broadcasting system is still unique because it would be financially impossible to organise anywhere else on the planet. Now it has even become impossible to sustain it here.
The Dutch government is shaving up to €127 million off the national TV/radio budgets, demanding that broadcasters merge rather than co-operate, though for the moment) not offering a financial incentive for anyone to do so. That’s probably coming. It wants to bring the number of public broadcasting production houses back to 6.

From Public Media back to Public Broadcast

Under pressure from the commercial press and broadcast sector, and Brussels, the Dutch government seems to be trying to reverse a trend being witnessed across the world.
o  Broadcasters are becoming part of a much wider cross-media mix.
o  Citizens don’t think in channels any more.
o  Programme formats are already emerging involving a second screen, whether it‘s a mobile or a tablet.
o  Public service broadcasting is becoming public service media.
The leading media companies in Europe are the ones that understand the audience needs and behaviour the best. In the US, I’d argue that Netflix and other content aggregators are becoming better positioned than any broadcaster to make money out of the audience. For the commercial sector, the audience IS the product.
So it’s strange that after going into depth that the future is digital, the Dutch Media Letter then explains broadcasting the way it was at the start of this Millennium. That’s not surprising since much of scientific argument for changes comes from a report by the Netherlands Scientific Council for Government Policy made 6 years ago in 2005. Called Focus on Function, I know the contents rather well having assisted in the editing and rewriting of the international version of the report called Media Policy for a Digital Age . Trying to explain the Dutch system to an international audience was extremely difficult.
At the time, I thought the report was strong on its analysis. But there should have been a follow-up discussion where someone took the policy and turned this into the production grammar that creative people could understand. As it was, the public broadcasters simply rejected it outright, and the government got sidetracked with other things. Until now, for the report is firmly back on the table.


The problem is that YouTube, Twitter, iPad, iPhone, Android, Wikileaks, Huffington Post, didn’t effectively exist when prof. dr. Wim B.H.J. van de Donk and his team were analyzing the media scene in 2005. They couldn’t foresee peer to peer or group publishing. I am one of many who argue that a public media company six years later will fail if it only tries to do things for society. Success comes when you combine it with conversations and productions that are going on from within society. It means content makers who build sustainable conversations will have to integrate relevant social platforms. Some conversations will start on the web and later become a TV show or a game.


The Vision is Really Television
The Dutch government plans to force the public service media to go back to being broadcasters. Activities that are not “programme related” will be starved of public funding and the number of websites will be drastically reduced. That won’t be difficult because the traffic to majority of websites is very low indeed. Twelve Digital thematic channels from the public broadcasters, currently seen only on some cable systems and via satellite will be phased out unless the public production companies decide to find alternative sources of funding.
If this goes ahead, I think we’ll see BBC-style work arounds. If you have been listening to BBC Radio 4 in the middle of the night recently, you may have heard children’s programmes going out. Why? Because to be part of the offer on iPlayer, they have to have been previously broadcast. No-one stipulates at what time and to whom.

But when it comes to factual content creation, the great public science experiments, cross-media documentaries, major investigative journalism are all being developed elsewhere in the world. Hilversum, at the moment, is in creative collapse. It is no good creating a Dutch Media Hub and trying to get foreign investment in the Netherlands without the right mix of technology, creatives and marketing. But, just having two out of three spells disaster.


I find it incredible that with the creative sector being so important to the Netherlands, that there is no public debate on its future. Yes, there is a debate in public. But there is no public consultation period in this country like you see conducted by Ofcom or the BBC Trust in the UK. Where is the crowdsourcing of ideas in this age of Big data? The Media letter refers to a body like BBC Worldwide which can oversee and control the commercial activities of public broadcasters. But there’s no mention of how public broadcasters will conduct a constructive, sustainable conversation with the public. Nothing like the BBC Trust is on the cards, so who represents the active public voice in Netherlands Public Broadcasting? The "audience is the product" approach is fine for commercial enterprises targeting advertisers or sponsors. They deliver a demographic to those who want to send a commercial message to particular group of people. But I don't believe citizens can even be the product when programmes are being made in the public interest with public funds.  So unless they plan something like a BBC Trust to ensure the audience has some say in what they are paying for, they have effectively eliminated the public in public broadcasting. I'd call that state media.
Dutch politicians talk to broadcasters, cultural foundations, government think tanks. But there is never an open conversation with individuals. May be they confuse an on-line consultation or a public hearing with some kind of conference or a town-hall debate? Or perhaps the vitriolic comments in the newspapers every time public broadcasting in mentioned makes them scared of the confrontation?  Bearing in mind that public broadcasting is funded by a government tax in the Netherlands, the public here is forced to pay whether they consume or not. So why no say or influence in what happens with something we thought we owned?
Posted by Jonathan Marks at Saturday, June 18, 2011