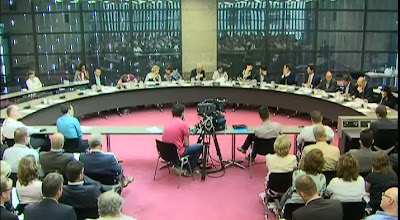 Just watched the media debate on the future of public broadcasting. I am pretty sure the regional broadcasters must be pleased with the outcome. The external broadcasting service, Radio Netherlands Worldwide, must be disappointed.

The Netherlands Minister for Culture, Marja van Bijsterveldt-Vliegenthart, stuck to the line in her media letter to the Dutch parliament of 10 days ago. In it she proposes that BVN (the Duitch language satellite TV service) and the broadcast services to Bonaire, Curacao, Aruba, Sint Eustatius, Saba and Sint Maarten will be retained. But they will be taken out of the Radio Netherlands portfolio and put somewhere in the Netherlands Public broadcasting system. Their funding is not in question.

Radio Netherlands as an independent foundation will be taken out of Dutch media law, and its budget at the Ministry of Culture effectively moved from 46 million to zero as from 1st Jan 2013. The Netherlands Ministry of Foreign Affairs said last Friday that it will continue one task of the Wereldomroep (stimulating free speech in countries without free media) for which it has found 8 million Euro from foreign affairs and 6 million from the overseas development aid budget. I'm guessing they will turn what's left into an NGO, since I didn't hear anyone say the Ministry of Foreign Affairs wants to run a broadcasting outfit. Exactly what they will pick from the existing Wereldomroep is not clear since there are already NGO organisations, such as Free Press Unlimited, Oxfam-Novib and Hivos who are doing projects of a similar nature. There are also a handful of NGO's doing work in the field of digital freedom, i.e. working on technologies to work around firewalls.

The Minister of Culture, in principle, rejected calls from opposition parties to extend the hand-over period or to reconsider the budget reduction for Radio Netherlands Worldwide. The station has three months to come up with a redundancy plan for the employees.

Update: Radio Netherlands reported Tuesday morning (28th June) that the Dutch parliament was due to vote today on three motions tabled yesterday affecting RNW. They were submitted by opposition parties during yesterday’s debate on public broadcasting. The most significant one is from Martijn van Dam of the PvdA (the Dutch Labour Party). In the motion he denounces the abrupt manner of the proposed cuts to RNW’s budget and suggests that “no irreversible decisions” be taken until there has been a further debate on the future of RNW after the summer recess. The Dutch government opposes all three motions arguing that since there is no more money available.

The vote on these motions has now been delayed until Thursday. I get the impression the Dutch government is focussing more on other motions put forward concerning domestic public broadcasting and rather heated public reactions to a quite separate bill which wants to take another 200 million Euro out of the cultural sector. The museums and arts institutions seem to have a much more vocal lobby. 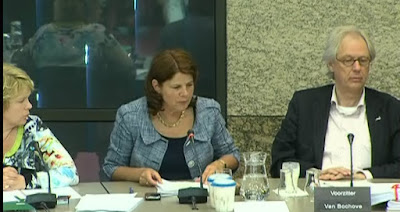 Email ThisBlogThis!Share to TwitterShare to FacebookShare to Pinterest
Labels: wereldomroep