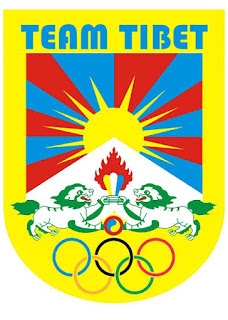 This website is already banned in China (I think because of remarks I made about Chinese jamming of foreign broadcasts), so this entry isn't going to change much. But I must admit I laughed out loud when I heard that yesterday three Reporters Without Borders' representatives had unfurled a banner showing the Olympic rings transformed into handcuffs at the official Olympic torch-lighting ceremony in Olympia Greece. There were all kinds of protests when Bush visited London a while back. But in Greece, the RSF guys were arrested and then freed on bail pending their trial, which has been scheduled for 29 May at 9:00 a.m. in Pyrgos (50 miles from Olympia).

But here's the incredible part of the story. They are charged with having "shown contempt for national symbols." By virtue of Article 361 of the Greek Penal Code, they could be sentenced to a year in prison as well as having to pay a fine.

RSF has responded. "This is an absurd and senseless charge. By making that gesture, we were in no way attacking the Olympic spirit, or Greece. We were simply protesting against the policy being carried out in China during this period of intensifying repression. We also wanted to use the threat of boycotting the Games' opening ceremony, an initiative we support, and encourage the International Olympic Committee to urge the Chinese government to respect human rights, as called for under the Olympic Charter," the organization asserted.

The Reporters Without Borders' three representatives are due to arrive back in Paris in a few hours time. I'm curious to hear what they will say at the press conference. It just goes to show you how three people can grab headlines in most countries of the world. Except China, of course. Has anyone noticed how CCTV9, the international service of Chinese TV, has been dumbed down in the run up the Olympics? A few years ago it was at least talking about problems in China and things been done to tackle them. Now it slipped back into being a slow, sugar-coated hand-clap for Beijing - which makes it intensely boring TV.
Posted by Jonathan Marks at Tuesday, March 25, 2008

It's gonna be tough for China to have nice and clean OG ...so many issues on so many fronts...