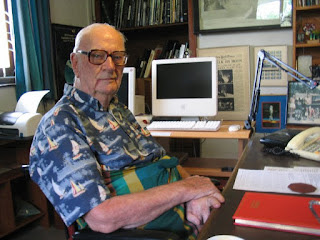 The photo is from Wikipedia in 2005. It is funny, but that's exactly how I remember Arthur C Clarke when I visited him in April 1985 and interviewed him for Media Network, a show I produced and presented for Radio Netherlands Worldwide. Arthur C Clarke always seemed to be timeless.

I was on my way to cover the Expo 85 in Japan and the cheapest way to get there was by Air Lanka. But, as it turned out, the time I spent in Sri Lanka was just as interesting as Tokyo, following up on broadcast history at both SLBC and Radio Netherlands media correspondent Victor Goonetilleke.

I remember phoning Clarke's diving business to ask for an interview. Clarke answered the phone himself. At first he didn't want to do the interview - I guess he had journalists on the phone at a regular basis. But I explained I was more interested in his scientific work than trying to find out what his next book was going to be about. But, in the end, he agreed.

I found a British scientist in the middle of tropical Colombo literally in technical paradise. Companies were asking him to be part of conferences on the future - and the future of communications. He showed me his 3 metre satellite dish and we spent over an hour scanning the skies for weak signals. Nothing was scrambled and you could see TV networks setting up feeds from different parts of Europe and Asia, often hours before they went on the air. I found the original interview this morning and posted it here. It runs about 7 minutes and was part of a longer documentary I made on broadcasting in that part of the world.

I shall always remember being given a pen upon leaving which was inscribed "stolen from Arthur C Clarke". I eventually lost the pen, but remembered the punch-line. Arthur's passing at age 90 is a celebration of a wonderful life. He had a remarkable ability to enthuse people about the universe and life in general. And his predictions, for the most part, were spot on.
Posted by Jonathan Marks at Wednesday, March 19, 2008

when ever i go to minehead, in somerset, i always look for that
blue plaque showing where he was born, opposite the park. can't understand why he moved to sri lanka it is only 30 degrees warmer.
seriously he was a great visionary
and i must say one of my favourite
films is 2001.thanks for the life
of arthur c. clark.