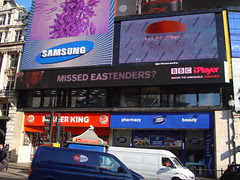 BBC iPlayer Ad in Picadilly Circus
Originally uploaded by Jonathan Marks
Whoa....things are worse at ITV than I thought. Guardian today has details.

ITV's online revenues were £33m last year - £117m off its target for 2010 - and ITV.com has been thrown into shadow by the BBC's iPlayer. ITV has high hopes for its on-demand tie-up with the BBC and Channel 4 but that will not launch until later this year. Facebook and Bebo, meanwhile, continue to cream Friends Reunited (which Grade's predecessor Charles Allen bought because he believed it would be a fount of winning TV show ideas, but so far has produced precisely none).

Meanwhile ITV shares have dropped 40% over the past six months and there's little chance of improvement while uncertainty remains over Sky's 17.9% stake.

I see big iPlayer ads on the screens in Picadilly at the moment (posted on my Flickr account).
Posted by Jonathan Marks at Thursday, March 06, 2008