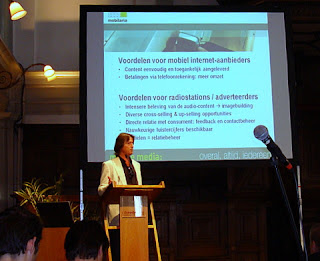 Interesting to hear the updates from Erik de Zwaart from Tunein FM, which is a service from a start-up company called Mobilaria set up by former Radio 538 personell who are looking for alternative platforms to DAB. Digital Audio Broadcasting has been a total failure in the Netherlands. The Dutch government was too greedy and demanded huge fees for analogue FM licenses, focussing on short-term gain rather than a beauty contest that happened in the UK. As a result, the commercial stations have boycotted the switch to DAB saying its an 1980's technology which is not spectrum efficient. I think they're right.

Talking with Wanjo Temkov, the managing director of Tunein I learned that they have done deals with telecom providers for now, but what they are doing will work with Wifi, DVB-H, DAB+ or any other broadcast platform that might come along. The Dutch Shoutcast model it would seem. The technology works and sounds as good as the audio you hear from Sirius or XM. But you do need an "all-you-can-eat" data subscription and don't try it yet outside the Netherlands unless you want to pay through the nose in roaming charges. But it is surely a matter of time.
Posted by Jonathan Marks at Monday, June 04, 2007