One Laptop per Child Update 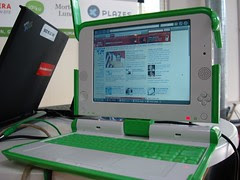 One Laptop Per Child
Originally uploaded by Jonathan Marks
On the second day of Reboot, Hakon Wium, the CEO of Opera Browser, took out a piece of kit that attracted more photographers than anything else. Its one of the beta versions of the One Laptop Per Child project, for which this Norwegian company has supplied software.

Meanwhile at a Harvard Law School cocktail party, Nicholas Negroponte gave a talk about One Laptop Per Child which contains a lot of updates. Ethan Zuckerman of Global Voices shared the news in his blog

The truth is, I learn something new every time Negroponte talks about the project. Even before he began talking, it was interesting to discover that he’s come equipped with almost a dozen “B2″ prototype machines. They’re open and live on tables around the room, for people to play with - that’s a big improvement from the last time I played with the machine, when the machines were still being hand-built, were in scarce supply and you needed someone to walk you through the Sugar interface.

Negroponte starts by reminding us that OLPC is an education project, not a laptop project. He traces his work on the project to Seymour Papert and to the learning process students go through in learning Logo. Debugging, he argues, is as close as we can get to learning how to think… and it works for skills like spelling, as well as for programming.

Much of the focus of his presentation is on the failure of schools around the world. He makes it clear that the reason for OLPC is for low-income countries where schools may not have buildings or teachers, not just for middle-income countries. He talks about a Nigerian classroom where the XO laptop is being tested - enrollment in the first grade class has doubled, because students came out of the woodwork to get to use the machine.

Students enter schools in first grade with wide, curious eyes, Nicholas tells us. By fourth grade, they’re bored and no longer curious. “We’re inoculating against ignorance.” That’s why the project can’t be incremental - you have to inoculate whole countries, not just a school or a village.

The landscape has changed around the project, as Negroponte acknowledges. He takes a swipe at Intel’s Classmate project, pointing out that the machine has a 65w power supply, while the XO generally draws less than 2 watts. “If Libya gave every student a Classmate, they’d have to build new power plants.” Answering a question about whether the machine will run Windows - it will, and it wouldn’t be open if it didn’t, he argues - he points out that Windows now has a $3 edition, in part in reaction to the OLPC project. “We don’t have to be in the laptop business.” If other projects can put a laptop in every child’s hands, the project achieves its goal, even if the laptop is not the XO.

Despite the enthusiasm of countries like Rwanda, Libya and Uruguay, all of which are entertaining the idea of providing laptops to every schoolchild, no country has yet written a cheque to the project. That includes Argentina, Brazil, Nigeria, Pakistan, Palestine and Thailand as well, all of whom Negroponte lists as first-stage adopters of the project. It’s a big cheque to write - nations are being asked to invest in the laptop one million at a time. That’s $176 million for the machines alone, at current pricing, plus money for distribution and Internet provision - the actual price tag could be closer to a $200 - 250 million investment. As the project scales up, the price drops - possibly as low as $100 per unit in 2009, possibly to $50 per unit in the next decade. Quanta, which manufactures the machine, is ready to scale to a million laptops per month by year’s end. That doesn’t sound like much, Negroponte tells us, but global laptop production is only 5 million a month.

In response to a question about whether laptops will be available in the US, Negroponte gives two answers. One is that there are some early discussions about making the laptop available in US schools. Also, it’s likely that end users will be able to purchase machines in a 1 for the price of 2 deal, where you can buy a machine, but subsidize one for students somewhere in the world. Negroponte makes it clear that OLPC won’t manage this project - they see it as too incremental - but they will allow it to happen and believe it will happen in the next 12 months.

Negroponte’s talk was fairly light on specs - two major changes that I noticed in his slides. The new generation of machines will using Lithium Iron Phosphate (LiPeFo4), a battery technology that is not yet in wide use, but has some characteristics which could be especially appropriate for the XO machine. Specifically, the batteries tend to deliver less heat than Lithium ion and are much more resistant to explosion if misused. It’s unclear whether they are easier to charge using human power than Lithium ion. Dr. Negroponte says that OLPC’s partners will be building a factory specifically to produce the LiPeFo4 batteries.

Flash memory costs have come down, however, and the machine currently features a gigabyte of flash RAM.

Negroponte closes with a story about the appearance of the machine, explaining why it’s green and white. The reason was Nigerian President Obasanjo’s enthusiastic embrace of the machine. After a cabinet meeting at Obasanjo’s villa, the President declared, “Professor Negroponte, I have one word for your project: enchanting.” Thrilled by the reception, Negroponte asked for the next prototype to be in the colors of the Nigerian flag - green and white.

I was listening to a radio show on a local station in Rwanda a couple of Sunday's ago and took part by e-mail (you can do this if you have a wifi radio I have found). The subject was education and the people in the studio, including people from the Ministry of Education also seemed positive about the project. What is definitely needed now is for one country to make a comittment.
Posted by Jonathan Marks at Saturday, June 02, 2007