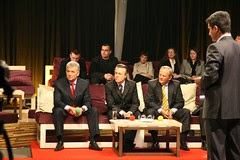 RNW Debate Coproduction
Originally uploaded by Jonathan Marks.
I'm in Bucharest, Romania at the moment to help organize a series of global debates on the future of the media and its independence from both commercial and political influence. Radio Netherlands Worldwide has been working with the Romanian TV news channel Realitatea on a unique live 2hr debate on the future of the media. It is the first time that journalists, media owners and politicians from all the parties have sat together in the same room. There is plurality of the press here but not always clear who owns what and how those interests affect what the Romanian public get to see and here. Since the fall of communism, Romanian media has changed drastically, with a large number of stations coming on the air to serve the population of 22 million people. I get the impression the development of the press is on the right track, but more transparency is needed, perhaps with a public code of ethics which stations would publish. If someone feels they have been mosrepresented in the media, what is there course of action for the right to reply? I find stations in Australia, like SBS, have the best model for others to follow.

Last night's live debate went well, being extended well past the initial plan for a 2 hour open debate, getting heated at times - but that made it even more interesting. Highlights of some of the statements are still running on national TV the next morning, linked to World Press Freedom Day, which is today. The conversation isn't closed - it should continue on a regular basis.

With 100 journalists killed, 2006 was the most savage and brutal year in the modern history of the media. The figure is largely due to the targeting of local journalists in Iraq, which saw 46 journalists killed. The murder of journalists in Afghanistan, Pakistan, the Philippines, Mexico, and Sri Lanka added to the figure.
Posted by Jonathan Marks at Thursday, May 03, 2007