The Reality Gap with Vista 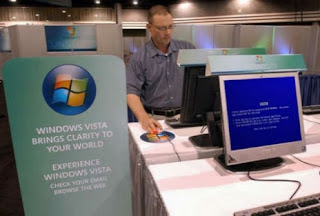 I've enjoyed reading a post from Bruce Schneier, who is an internationally renowned security technologist and author. Back in February he posted about the impending problems with Vista.

Windows Vista includes an array of "features" that you don't want. These features will make your computer less reliable and less secure. They'll make your computer less stable and run slower. They will cause technical support problems. They may even require you to upgrade some of your peripheral hardware and existing software. And these features won't do anything useful. In fact, they're working against you. They're digital rights management (DRM) features built into Vista at the behest of the entertainment industry.

And you don't get to refuse them.

The details are pretty geeky, but basically Microsoft has reworked a lot of the core operating system to add copy protection technology for new media formats like HD DVD and Blu-ray disks. Certain high-quality output paths -- audio and video -- are reserved for protected peripheral devices. Sometimes output quality is artificially degraded; sometimes output is prevented entirely. And Vista continuously spends CPU time monitoring itself, trying to figure out if you're doing something that it thinks you shouldn't. If it does, it limits functionality and in extreme cases restarts just the video subsystem. We still don't know the exact details of all this, and how far-reaching it is, but it doesn't look good.

Microsoft put all those functionality-crippling features into Vista because it wants to own the entertainment industry. This isn't how Microsoft spins it, of course. It maintains that it has no choice, that it's Hollywood that is demanding DRM in Windows in order to allow "premium content" -- meaning, new movies that are still earning revenue -- onto your computer. If Microsoft didn't play along, it'd be relegated to second-class status as Hollywood pulled its support for the platform.

It's all complete nonsense. Microsoft could have easily told the entertainment industry that it was not going to deliberately cripple its operating system, take it or leave it. With 95% of the operating system market, where else would Hollywood go? Sure, Big Media has been pushing DRM, but recently some -- Sony after their 2005 debacle and now EMI Group -- are having second thoughts.

What the entertainment companies are finally realizing is that DRM doesn't work, and just annoys their customers. Like every other DRM system ever invented, Microsoft's won't keep the professional pirates from making copies of whatever they want. The DRM security in Vista was broken the day it was released. Sure, Microsoft will patch it, but the patched system will get broken as well. It's an arms race, and the defenders can't possibly win.

I believe that Microsoft knows this and also knows that it doesn't matter. This isn't about stopping pirates and the small percentage of people who download free movies from the Internet. This isn't even about Microsoft satisfying its Hollywood customers at the expense of those of us paying for the privilege of using Vista. This is about the overwhelming majority of honest users and who owns the distribution channels to them. And while it may have started as a partnership, in the end Microsoft is going to end up locking the movie companies into selling content in its proprietary formats.

We saw this trick before; Apple pulled it on the recording industry. First iTunes worked in partnership with the major record labels to distribute content, but soon Warner Music's CEO Edgar Bronfman Jr. found that he wasn't able to dictate a pricing model to Steve Jobs. The same thing will happen here; after Vista is firmly entrenched in the marketplace, Sony's Howard Stringer won't be able to dictate pricing or terms to Bill Gates. This is a war for 21st-century movie distribution and, when the dust settles, Hollywood won't know what hit them.

To be fair, just last week Steve Jobs publicly came out against DRM for music. It's a reasonable business position, now that Apple controls the online music distribution market. But Jobs never mentioned movies, and he is the largest single shareholder in Disney. Talk is cheap. The real question is would he actually allow iTunes Music Store purchases to play on Microsoft or Sony players, or is this just a clever way of deflecting blame to the -- already hated -- music labels.

Microsoft is reaching for a much bigger prize than Apple: not just Hollywood, but also peripheral hardware vendors. Vista's DRM will require driver developers to comply with all kinds of rules and be certified; otherwise, they won't work. And Microsoft talks about expanding this to independent software vendors as well. It's another war for control of the computer market.

I don't see the market righting this wrong, because Microsoft's monopoly position gives it much more power than we consumers can hope to have. It might not be as obvious as Microsoft using its operating system monopoly to kill Netscape and own the browser market, but it's really no different. Microsoft's entertainment market grab might further entrench its monopoly position, but it will cause serious damage to both the computer and entertainment industries. DRM is bad, both for consumers and for the entertainment industry: something the entertainment industry is just starting to realize, but Microsoft is still fighting. Some researchers think that this is the final straw that will drive Windows users to the competition, but I think the courts are necessary.

In the meantime, the only advice I can offer you is to not upgrade to Vista. It will be hard. Microsoft's bundling deals with computer manufacturers mean that it will be increasingly hard not to get the new operating system with new computers. And Microsoft has some pretty deep pockets and can wait us all out if it wants to. Yes, some people will shift to Macintosh and some fewer number to Linux, but most of us are stuck on Windows. Still, if enough customers say no to Vista, the company might actually listen


I have to say no to VISTA for the moment because all the software I'm using for a radio station project in Benin only works on XP. The soundcard drivers on Vista are so different from XP that many of the software manufacturers are balking at the extra work - for very little return. So radio station automation may move to Linux or Apple just like that. Anyone know a good source of French language PCs and keyboards with Windows XP on them? I thought Dell would do it if you asked. They won't here in the Netherlands.
Posted by Jonathan Marks at Thursday, May 17, 2007

Try HP/Compaq. The do french keyboards and they are easier to deal with than Dell.

Hello I manage a website about Benin in english and french
http://www.niger1.com/benin.html
i just read your blog also i may be you will be interested in talkning about your upcoming radio on our page
email me if you are interested moub21@gmail.com

"Campcaster" is a free and open source radio station automation system that runs on GNU/Linux.

French language keyboards etc. are easily found here in Canada given that both English and French are official languages. It's the law!