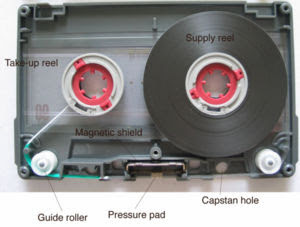 Currys (used to be Dixons) in the UK seems to be the pioneer in killing traditional technology, simply by announcing they are not going to sell it any more. A while back they said that analogue FM radios would be phased out of their lines. This evening there's a press release saying they the days of the audio cassette tape are numbered. They said that when existing stocks on blank cassettes are exhausted, they will not be stocking any more. Not bad for a format released by Philips around 1963 as an aid to office dictation. The problem was that "secretaries found it difficult to thread reel-to-reel tape", hence the cassette had it pre-thread in a plastic housing. Philips guarded the format like a hawk, specifying not only the size but also the speed at which the tape could operate. 4.76 cms per second. Companies who tried to double the speed were ordered to cease and desist. It was Ray Dolby who made a home version of his analogue noise reduction system in 1968 that made the cassette interesting as a music carrier, especially in places like a car where playing a vinyl record would have been challenging to say the least. Despite the slow speed of the tape, Dolby B encoded tapes had better audio response, especially at the higher frequencies. A year later, the sales of pre-recorded cassettes peaked at 83 million, and in 1990 95 million blank tapes were sold in the UK. In 2007, that will be less than a million and less than 10 percent of audio equipment sold now is cassette playback capable.

I am gradually copying a collection of audio cassettes onto hard drive. Most of the recordings I made in the 1980's on chrome tape seem to have lasted quite well. The most important aspect of playback is ensuring the audio head is at 90 degrees to the tape or the treble response quickly drops off. I remember visiting the Philips cassette development lab in Hasselt and meeting the inventor of the product - he was still sharing a desk with another inventor at a time when there were 1 billion cassettes sold a year in the world.

I wonder what radio stations in Africa will do as supplies dwindle. Many of the MP3 recorders are useless for the kind of conditions their reporters need in the field. The cassette had its faults, but it was pretty rugged, even if you dropped it.

One cassette I have from Lou Josephs was of a recording from the "DXing Worldwide" show on WRUL shortwwave which has a feature on what is called the "audio k-set". It was so new in 1964 that people didn't know how to pronounce it.
Posted by Jonathan Marks at Saturday, May 05, 2007

Nah it was the North Carolina pronunciation of the term. Larry Yount couldn't say the word.