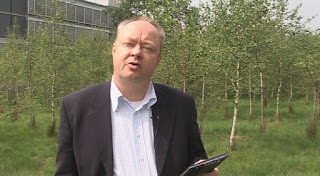 Spent a fascinating afternoon at the Eindhoven New Technology campus talking to Willem Endhoven. This place used to be the Natlab run by Philips - my goodness it has changed. More like Standford campus than the rather drab labs of the 1980's.

I've been following the development of e-paper, after seeing it at IFA Berlin in 2003 and looking at the Sony e-player (which I didn't buy to replace my old Rocketbook reader). It seems the Sony technology actually came from Irex technologies in Eindhoven, a start-up spun off from Philips.

The e-paper technology is slower than LCD displays but the screen only uses power when the image changes. They showed me screens which were loaded in 2001 with images and, unlike paper, the images doesn't fade. Think of it as replacing a conventional printer rather than a tablet PC screen. So why is it cool? Because the player really does have superb resolution (160 dots per inch...16 levels of grey...which means 786 x 1024 pixels.) and I was impressed how readable it was in the summer sun we enjoyed today. Its high contrast black and white. Yes, they are experimenting with colour, but that makes the device a lot more complex to get the same resolution we're already seeing in black and white.

I guess the business model of the company is partly to provide the players, but also as a distributor of content using the built-in wifi. Not surprisingly, there has been a lot of interest from newspaper owners. Although NOT suitable for video, the device does have built in audio, though not yet implemented. Linux based. It is a touch screen, but it works using a special pen stylus. Pressing the screen with your finger doesn't work. Software updates are done automatically over the wifi. 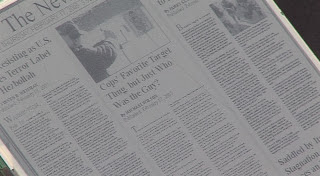