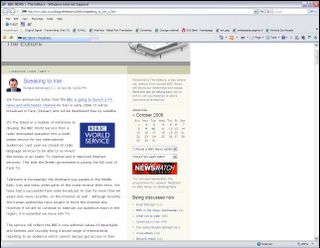 Looks to me like there is an orchestrated "let's slam BBC WS" on Richard Sambrook's blog at the moment. Obviously, the audience figures will be the measure as to whether BBC succeeds with its Iranian TV operation. That will be difficult to measure accurately, especially as I guess it will be between 2-4% when it starts up, depending which satellite they choose - probably Hotbird. If it is indeed "Speaking to Iran" it will be as effective as IRIB-TV "speaking to London". If it provides a dialogue, rather than a monologue, it has some chance of success.