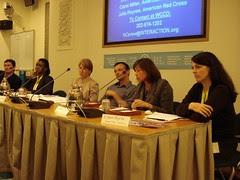 Many of the meeting rooms are named after countries that are members of the FAO. In the Iran room this afternoon I went to a curious session on disaster communications – dominated by US aid organizations.

There was confusion during the session between what is communicated immediately after a disaster to the people in donor countries – and what is communicated to people in the area affected by the disaster. Most of the speakers at the session were busy with communications to the public after a disaster and seem to have two goals – a) raising money. B) raising brand awareness that their organization is actively involved. There were plenty of statements by the aid organizations with how they “use” the media to get the message across. That may have a short-term effect but in the mid- and long term many of those policies are a disaster in itself. The relationship between the traditional media and many aid organizations is frosty, partly because post-Tsunami reports have been exposed in the media that were not complimentary about the way agencies competed against each other. The relationship between most aid agencies and the “new media”, i.e. the blogosphere I would categorize as non existent. If you can’t prove to many of the organizations that you are working for a mass-media outlet, then you’re simply not part of the circus.

Listening to the presentations made me even more convinced of the need for broadcasterswithoutborders.org . No one seems to be concentrating on putting back FM radio services in areas affected by disaster for a period of up to 2 years after the event. Plenty of organizations are looking at disaster impact reduction. I would argue that some organizations like BBC World Service trust are busy with health and welfare programmes designed for areas with mid- to long term information needs. But the information needs immediately after a disaster are completely different. And each country seems to have a different mix of state, public and private broadcasting. Aid agencies assume that immediately after a disaster, radio stations are eager to provide a public service, in the same way the BBC or NOS would do in Britain or Holland. But many of the countries hit by the Tsunami have state broadcasters with little or no market share. Popular commercial local broadcasters are trying to run a business – public service is not in their charter. When crisis strikes, they lose 50%-100% of their income from advertisers, so paying the salaries of journalists over a 6 month period becomes the single focus of the station owners. Aid agencies assume they will not have to pay for airtime – often choosing the wrong outlets based on price rather than market-share. In short, a proper communications strategy to locals in not in place for most countries. Both USAID and BBC WS Trust are working on media profiles of various states which is being made public. I’m curious to see what it will recommend.

For the record, this WCCD defined Communication for Development . . .
• Is, first and foremost, about people and the process needed to facilitate their sharing of knowledge and perceptions in order to effect positive developmental change - media and technology are tools to this end, but not ends in themselves.
• Is based on dialogue, which is necessary to promote stakeholders' participation. Such participation is needed in order to understand stakeholder perceptions, perspectives, values, attitudes and practices so they can be incorporated into the design and implementation of development initiatives.
• Follows the two-way, horizontal model and not the traditional one-way, vertical model of Sender-Message-Channel-Receiver and increasingly makes use of emerging many to many forms of communication made possible through new technologies. Even when used along more unidirectional models (e.g., campaigns), communication needs to facilitate the understanding and taking into account of people's perceptions, priorities and knowledge.
• Gives voice to those most affected by the development issue(s) at stake, allowing them to participate directly in defining and implementing solutions and identifying development directions.
• Recognizes that reality is largely socially constructed. The implications are that there can be different realities (or different perceptions of the same reality) for the same situation according to specific groups' perceptions and needs. Thus the role of development and by extension communication is not to "impose" the correct reality, but rather to foster dialogue to facilitate mutual understanding among different perspectives. Communication for development therefore, respects and works with the different social, religious and cultural foundations of the people, communities and nations engaged in development processes.
• Is contextual. There is no universal formula capable of addressing all situations and therefore it should be applied according to the cultural, social and economic context.
• Uses a number of tools, techniques, media and methods to facilitate mutual understanding, define and bridge differences of perceptions, and take action towards change, according to the particular needs of the development initiative. These tools and techniques should be used in an integrated way and are most effective when used at the beginning of development initiatives.