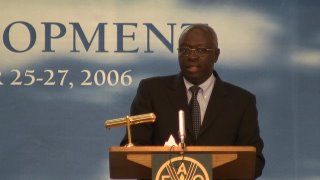 Amid all the enthusiasm for new technology, let us not forget the role of more traditional media. Radio, and in particular rural radio, which is produced with local audience participation and broadcast in local languages, is a highly effective channel for transmitting information on a wide range of issues to often remote areas.

Dr Jacques Diouf, Director General of the FAO in his presentation to the WCCD.

It is a shame Diouf has to dash off immediately after his keynote. I would like to have heard more examples from him. But he's right and FAO's and the World Bank's support for rural radio is very important that this stage of their development. Independent media should hold governments accountable for their actions in the court of public opinion. The bank says it now believes that building empowered media environments are critical to development. A free flow of information is crucial in the fight against poverty, because it helps everyone share their experiences. Development doesn’t work on its own. It also brings reactions and views from people who donors are trying to help. Journalists need the access to report fairly on issues and the capacity to report in the public interest.