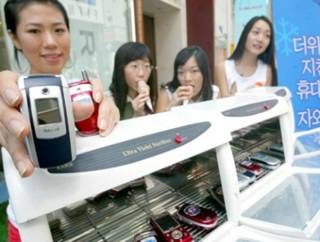 What is happening here? In South Korea there is a growing fad for phone sterilization....Heaven forbid that you might pick up some nasty bug from a unsanitized phone.
Posted by Jonathan Marks at Tuesday, October 05, 2004

Or ANY vending machine....