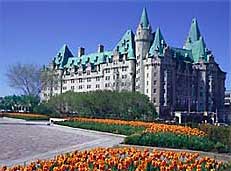 Radio colleagues at the CBC in Ottawa tell me they are saying a fond farewell to their "castle" studios, located for the past 80 years in the Chateau Laurier building and within a stones throw of the Canadian Parliament buildings. CBC Radio is now in a new broadcast centre with TV & Web colleagues in Queen Street, but without that nostalgia and grandeur that lurks in the corridors of famous buildings. The Chateau is also a hotel, and it has a Dutch connection. During the Second World War, one of the rooms in the hotel was briefly declared Dutch territory. That was because the late Dutch Queen Juliana and Prince Bernhard took refuge in Ottawa during the war, and on 19th of January 1943, Juliana gave birth to Princess Margriet.

There's also a great English-style pub across the road from the hotel!