Digital Audio Broadcasting has an multi-media cousin, i.e. people who want to use the great mobile transport system within DAB Eureka 147 to broadcast more than just audio.

The Korean company of LG Electronics announced today that it has developed a terrestrial mobile multimedia broadcasting (DMB) chip that integrates receiver and AV into one chip. LG is pushing the fact that the new chip is economic is power consumption when compared with the existing power hungry and expensive terrestrial DMB chips.

In order to integrate receiver and AV into one chip, LG has invested US $5 million and recruited 50 researchers who have been working on the project for the past two years. The chip is designed to be used for the reception of terrestrial DMB services in Korea which Korean Broadcasting System, KBS, will launch later this year. The chip can be used for in-car automobile terminals, laptops and PDAs.

It looks like we are one step further having DMB services incorporated into the phone. Samsung saus their project for the development of a terrestrial DMB tuner for mobile phones is to be completed in a couple of weeks. Meanwhile, the same technology is being used from space. 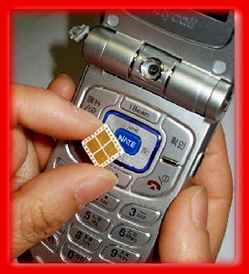 In Korea, the domestic digital multimedia broadcasting (DMB) industry witnessed the successful launch a while ago of the Hanbyol DMB satellite by SK Telecom. Major domestic tuner developers including Samsung Electro-Mechanics and LG Innotek are now struggling for leadership to build tuners for this DMB SATELLITE (L-Band) service.

Samsung Electro-Mechanics has increased its digital tuner business by 47% this year, up from 30% last year, and says it aims to achieve 34% of the world market share by 2007. With a sales goal of approximately US$9 million within one year, it anticipates that the demand for the satellite DMB tuner will be explosive once the DMB services are commercialized.

With satellite DMB tuner embedded in mobile phones, users can enjoy high-quality TV, movie trailers and CD-quality music without worrying about heavy download fees. "Multimedia in the pocket" or "wearable TV and audio" are likely to become realities soon. The satellite DMB tuner from Samsung Electro-Mechanics is only 8.0 x 7.2 x 1.4mm, and combines the company's proprietary tuner technology with LTCC, today's most advanced ceramic material technology.

Applying the LTCC technology to tuners allows free implementation of internal micro circuitry and the insertion of chip resistors between the ceramic layers, thus minimizing the tuner's size. The new tuner also features superior noise reduction of 2.0dB or less compared to 2.5dB of typical tuners, providing cleaner images even from weak signals.

"The world's smallest tuner meets the customers' requirements for next-generation broadcasting services," said Young-won Park, managing direct of DMB business of Samsung Electro-Mechanics. "Taking this great opportunity, we will accelerate next-generation product development by using the most advanced technologies such as LTCC."

The company scheduled to provide samples of the new DMB tuner to domestic major mobile handset manufacturers in April, and start full-scale mass production in the third quarter of 2004 when the satellite DMB service is expected to become commercialized.