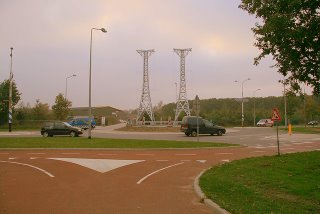 So there I am, driving along the Randweg, a road on the southern side of the my home town, Huizen, in the Netherlands.

I came up to a roundabout that has been recently renovated and what did I see? A fifth-size replica of the world's first rotatable shortwave transmitting tower....slap bang in the middle of a new roundabout. Went back home to get the camera...just couldn't believe it. It was made of wood and stood on a site about 300 metres from the roundabout between 1937 until 22nd September 1958 when it was blown-up. Seems it took four attempts to knock the 63 metre high masts over. A new, more powerful site in Lopik, near Utrecht took over the transmissions of what was, by then, Radio Nederland Wereldomroep. The scale-model is just over 12 metres high.

As I was filming this new monument, I got mixed reactions from passers by. Some seem to be dead against it, probably because they hadn't a clue what it was. Some older folk, born and bred in this fishing village, were kinda proud of Huizen's link with the past. One kindly old gent offered to show me a set of old photos he'd kept. Another lady remember playing in the masts in 1958 when the towers were awaiting demolition. She also recalled how the turntable used to make a strange squeal like wheels on a railway engine as it spun round late in the afternoons and at night. The antenna strung between the masts was directional. By rotating it, the signal could be beamed in different directions, mainly to Asia, Africa and North America. The antenna, I believe, was actually tuned to a single frequency in the early days, 9590 kHz in the 31 metre band.
More pictures on my Flickr pages.