Lookings for Comedy in the Muslim World 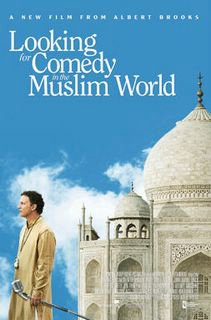 I remember Albert Brooks for his role as the passionate journalist (but heavily sweating newsreader) in the film Broadcast News. I bought it on DVD when I was last in the States and still find it an amusing film.

As from January 20th 2006, Brooks is back on our screens as the central character in a film called Looking for Comedy in the Muslim World. The trailer looks amusing - its the story of what happens when the U.S. Government sends comedian Albert Brooks to India and Pakistan to find out what makes the over 300 million Muslims in the region laugh. Brooks, accompanied by two state department handlers and his trusted assistant, goes on a journey that takes him from a concert stage in New Delhi, to the Taj Mahal, to a secret location in the mountains of Pakistan. Wonder if they are researching another new TV channel - like Al-Hurrah? Will other Muslims find it funny? Note that it is focussed on South Asia rather than the Middle East or Indonesia.
Posted by Jonathan Marks at Sunday, November 13, 2005