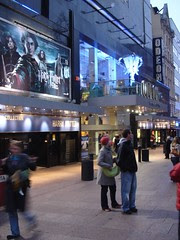 Ask for HP in London and they used to hand you brown sauce. Now it means Harry Potter (and the Goblet of Fire) which dominates the scene in Leicester Sq at the moment. The premiere took place here. The trees on the square have been clever lit by spotlights on the side of the cinema to create the "letters" effect seen in the first film