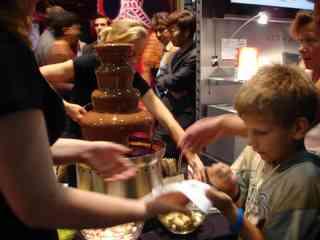 Saturday had better attendance figures from the public, although the areas with the international dealers from China and the halls showing scientific developments are very quiet still. HD television is the most important message here for most companies. The busiest stands have a gimmick - T-mobile with its kites or this stand (left) with a fountain of chocoloate...in which they were dipping banana bits.

I am concerned that some of the messages for traditional radio users are confusing ...we have DVB-t, DVB-s, DAB, Wireless LAN, DRM - all ways to get audio into the home. I have done quite a lot of research here to see what is happening to the European media industry and what chance it has of catching up with North America and Asia.

In France and Geramany, I see signs that there is more HD production starting up - although still well behind UK. In the Netherlands, though, it is a novelty if you shoot material in 16 by 9, let alone HD. That means a lot of archive material in the Netherlands is going to look pretty awful when the new LCD screens come onto the market later this year.
Posted by Jonathan Marks at Saturday, September 03, 2005