Robocup 2013 kicks off in style - and a more serious purpose


I kid you not. For the next few days, Eindhoven, The Netherlands is home to over 2500 robotics enthusiasts as part of the international Robocup2013 competition. A huge effort has gone in to hosting this international tournament. 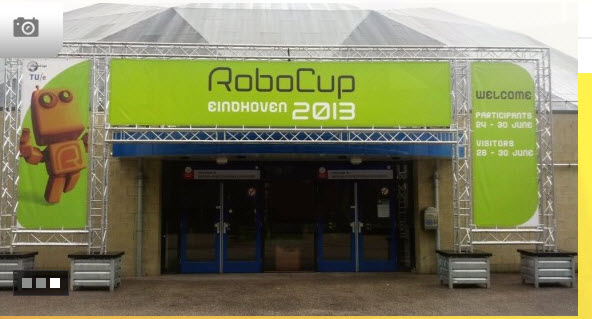 While to outsiders it may just look like a geek fest, the artificial intelligence technologies being developed by researchers are increasingly important. to society. Not only to do the jobs that are routine, but also to go into areas where no humans would dare to tread. Robots are already used in natural disasters, but they always need to be driven. To build effective robots that can operate and think for themselves will need another couple of decades. The Robocup organisers have set themselves a goal. To build a robot soccer team that beats a human team by the year 2050.


Live feeds from the event are here below and are active throughout the tournament (Eindhoven is on time zome UTC+2). It ends on June 30th.

The competition is split into various leagues, for example, how can robots be used in the home? Look at this video from a previous event.


Are you building a robotics company?

Many of the contestants in Eindhoven are doing more that just playing games. This is a great opportunity to show the outside world just what artificial intelligence has achieved so far.

Our brand new HightechXL accelerator is actively looking for teams that are interested in applying for a high-tech accelerator program we're organising in Eindhoven in November 2013. Robotics is one of the 8 fields of interest. Here are ten reasons to consider the High Tech Campus as a place to build your robotics company. 8000 next-door neighbours who are engineers, entrepreneurs and developers sounds like a pretty good reason to me.