Building on the shoulders of Giants. Open Innovation Rocks

These last two decades have been totally disrupted by the Internet. There isn't a business that hasn't been affected. And all this the virtual connectivity, as well as cheap access to powerful technology, has also affected the way companies innovate. 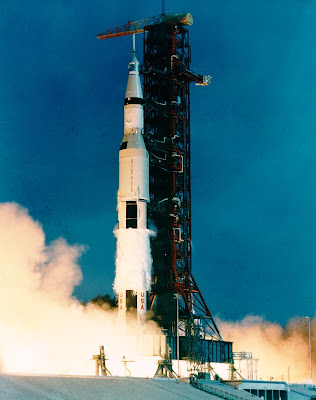 Most of us are walking around with several thousand times more computing power than NASA used to send a man to the moon in 1969. The so-called Apollo Guidance Computer (AGC) used a real time operating system had approximately 64 kilobyte of memory and operated at a speed if 0.043 MHz.
The AGC had a miniscule memory....

Today, as Futurist Gerd Leonhard often says in his talks, it feels as if the speed of disruptive change is no longer linear. But it has become logarithmic. 8 comes next to four instead of 5.

The late Peter F. Drucker, the Austrian-born US management consultant, is often credited with explaining how larger manufacturers innovated in the past. Basically they locked themselves away in secret labs, developing products they could patent and then sell to the public or other businesses. As the world becomes more connected, this is becoming harder and harder to do.

Meanwhile, along came the notion of End-user innovation. A person or a small company develops an innovation for their own use because existing products or services don't meet their needs. Access to powerful computers as well as cheap hardware has made it possible for brilliant companies to start in the back of a garage, often funded by personal savings.

In 1988, MIT economist Eric von Hippel identified end-user innovation as, by far, the most important and critical in his classic book on the subject "Sources of Innovation" now available for free download.

The Kline Chain-linked model of innovation places great emphasis on potential market needs as drivers of the innovation process. It also describes the complex and often iterative feedback loops between marketing, design, manufacturing, and R&D.

To use this sounds like very early thinking that we know call the Business Model Canvas.

Jed Cristiansen is an American living in London. He's raced solar-powered cars across the Australian outback, operated nuclear reactors and US Navy submarines, been a consultant, and currently works for Google.

In 2009, he wrote an extensive paper outlining how people could copy Y combinator, the successful accelerator program that kicked things off in Silicon Valley. It's inspired us to build a more focussed program in the South of the Netherlands called HighTechXL. The report is an extensive analysis, but draws relatively simple conclusions.

Jed now runs Seed-Database which monitors the successes of the Accelerator community. That turns out to be around 169 different programs, most of which are still in business.

I've spent the last month wandering around Eindhoven, which is arguably the smartest city in the Netherlands. And the 1 sq km on the outskirts of time is brainiest concentration of talent in Western Europe.

It strange to think that back in the early nineties this whole area was a sort of Philips Forbidden City, when geniuses were inventing for you.

But all of this invention was behind barbed wire. With the establishment of the High-Tech Campus, and the arrival of around 100 companies alongside Philips from 2003 onwards, the campus has long taken down what were the barriers to innovation. They discovered quite late that big companies constantly need sparks of inspiration. And they need to get that from small start-ups operating on the edge. Taking little for granted.

The challenge when you're developing hardware alongside software is always tapping in to enough money to be able to make useful prototypes. And in the case of high-tech, more companies need to test their ideas MUCH earlier to avoid calling into the "we invent for you but you don't like it" syndrome.