FM Reception limps back into action 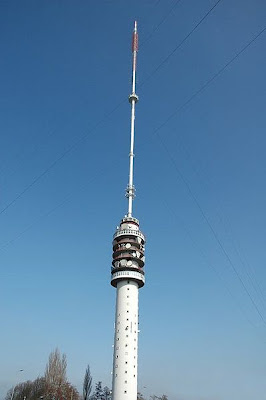 It seems the Lopik FM Radio/Digital TV transmitter tower (pictured above. Photo is from Wikipedia) is resuming service this evening around 18 UTC, now that new antenna cables have been installed. This complete shut-down of one of the most important broadcast towers in the Netherlands follows a small fire on Friday. I find it incredible that the agency responsible (NOVEC) clearly doesn't have a communications plan in place to explain to the public what's going on, when services will be resumed, etc. Novec has apparently carried out checks at other sites in the Netherlands and reported to the media that things are normal. According to official sources, it doesn't look at though the fires were connected or that they were started deliberately. But supposing they had? Why don't they tell the public directly? I notice that the website Novec.nl has been snapped up by a alarm network Callmax which doesn't help matters.

The public networks say that FM transmitters on the towers in Hilversum, North Holland and Tjerkgaas in Friesland have been brought on the air to help fill the gap. The relief from the transmitter in Hilversum for Radio 1 was short lived as it broke down on Saturday evening. The public broadcasters have decided to continue with the relay of Radio 1 instead of Radio 5 on 747 kHz for the time being.

A temporary mast is being built at the Johan Willem Friso Dutch army barracks in Assen. This will be used until a new mast is built on the top of the tower in Smilde. It's bizarre that this old Dutch army barracks, threatened with closure at the end of last year, is pixellated out on Google Earth, but in the clear on most Youtube videos. Looks quaint more than anything else.